Are human relationships subject to the same forces of attraction inherent to chemical reactions? The question animates Goethe’s Elective Affinities, the 1809 novel from which this exhibition draws its title. From the outset, Goethe’s narrative sets up an open dialogue between science and sensibility. The author addresses natural attractions, suggests an affective determinism, and examines whether one’s decisions can inform passionate impulses.
Expanding on these ideas, this exhibition offers a space to reflect on the links between scientific and affective realms, overlapping notions of utopia, technology, identity, nomenclature and history. From these various perspectives, the works assume a sensorial charge. The evocations of flesh and telluric textures coexist with olfactory and haptic references, projecting corporality on antropomorphic and anachronistic fictions. The principles of association and interrelation are fundamental here. They express themselves within each project, echoing the selective, emotional and combinative mechanisms of memory while stimulating anticipation for the future.
Bringing together these six artists from distinct backgrounds exposes the multiple intersections between their respective practices. In this sense, the concept of elective affinities may recall the means of articulation and composition implicit to both the artist’s and the curator’s work. By extension, it draws attention to the structural function of the art world’s relational fabric. 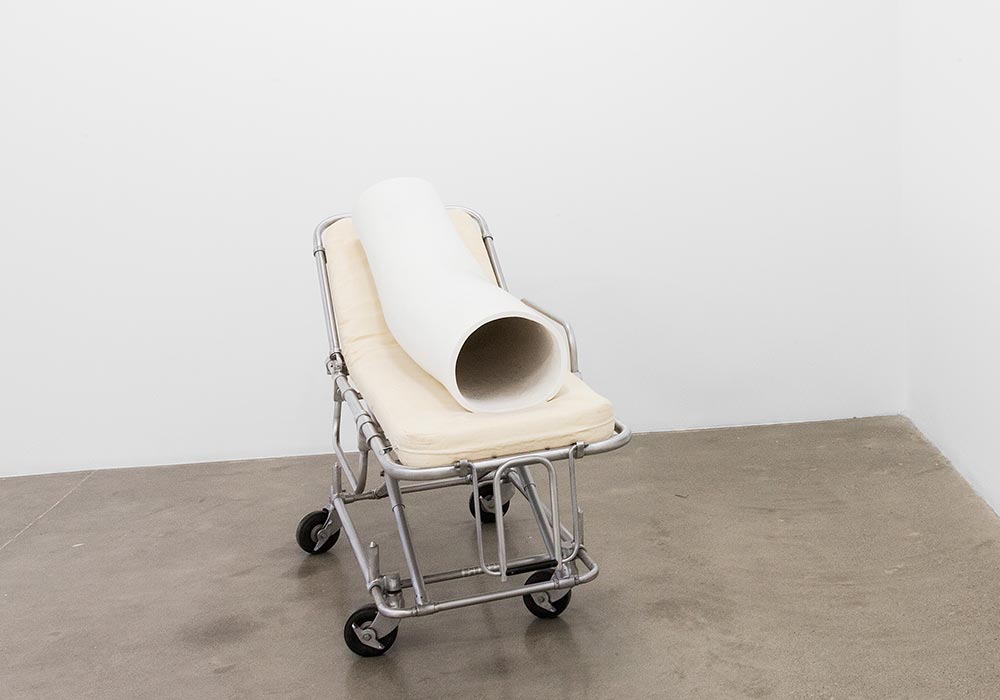 A large tube of plaster reclines on a gurney, its form suggestive of an anonymous body, its solitude and vulnerability an appeal to a certain sense of empathy. The naked organ might evoke plumbing, or a segment of a circulatory system cut out and isolated from its network. Although the wide, end-to-end opening blurs the line between interior and exterior, the object conveys a sculptural mass, a material weight whose singularity distances it from a medical association. The tubular form’s intriguing character is reinforced by the uncertain void visible within each orifice. Tube puts in high relief the artist’s proclivity for unpredictable assemblages and his search for new sensory configurations.

256 shattered light bulbs are aligned on a grid of sixteen equally-spaced rows. Fragments of blown-out bulbs cling to their caps, while others have completely disappeared, leaving only stems and contact wires. Under a glass box and now protected against exterior forces, they appear as debris from architecture that has suffered an extreme commotion, or been blown out by a blast. If the symbol of an illuminated light bulb signifies innovation and the notion of genius, the explosion of the object suggests obfuscation and obscurantism. This cemetery of exploded light bulbs invites a variety of readings, evoking obsolescence and the failure of reason. Technical innovations promise a world rescued from misery, however they also threaten to set in motion new forms of dominion and violence.