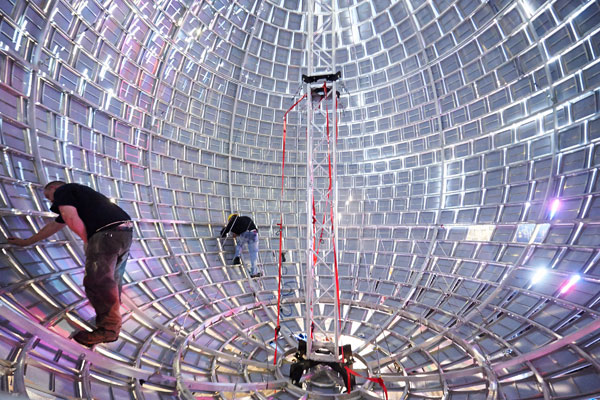 Installation view from within the work

The spectacular view of the starry sky has always been a source of delight and wonder. It isn’t hard to imagine that wisdom originated in contemplating the firmament, an experience now impossible in Cities because of the considerable obtrusive artificial light that prevents us from seeing the stars in the heavens.

Initially inspired by a photograph which appeared in the Los Angeles Times in 1942, “The Battle of Los Angeles”, showing anti-aircraft searchlights concentrating on Unidentified Flying Objects, the largest mirror ball ever made will be suspended from a construction crane lit by many beams of light. The one thousand mirrors will reflect the light to render and re-create the starry sky for Toronto’s citizens during Luminato festival.