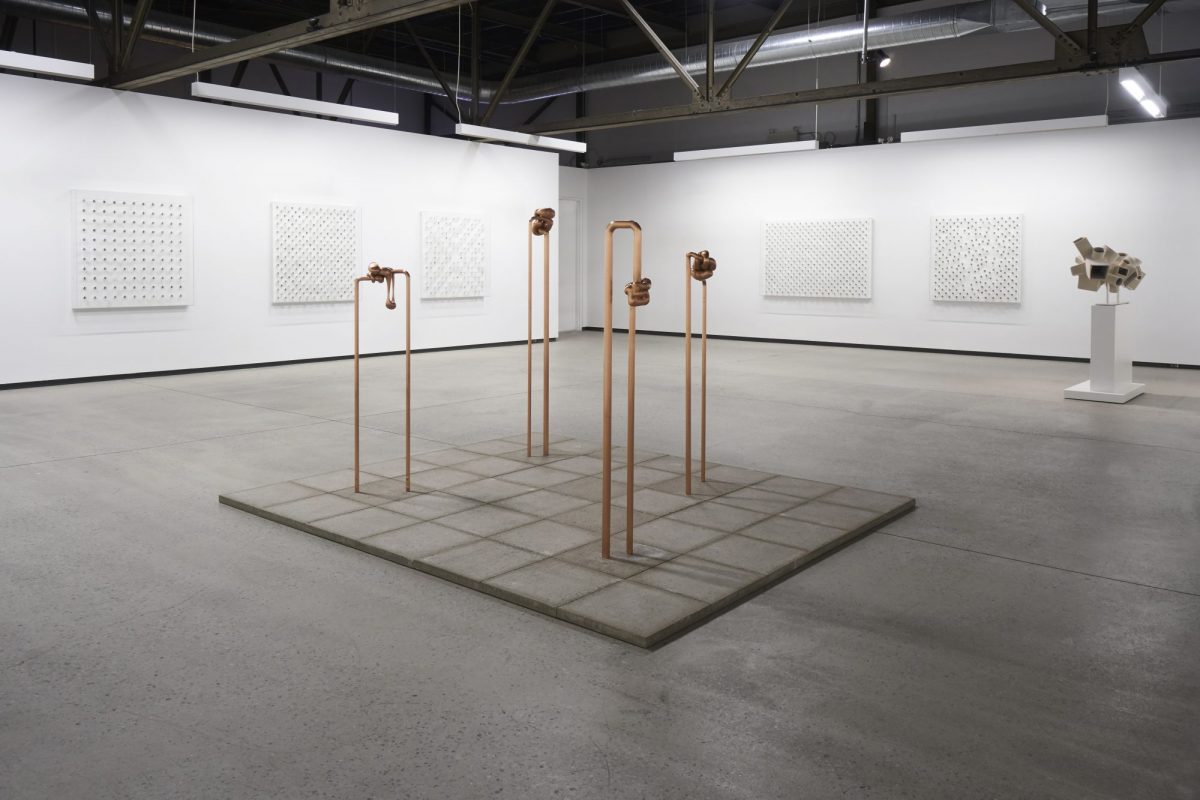 Michel de Broin is known for using everyday objects to reveal relationships between mechanical and social bodies. Whether adopting a power drill, bicycle, artillery gun or light bulb, his alterations to these tools point beyond objects to the people who use them, becoming metaphors for the flesh-and-bones human body. In his latest sculptures, knots appear as if by magic in otherwise straight copper pipes, twisting and bulging like veins or intestines. de Broin takes the flow of electrical signals as inspiration. According to the logic of electricity, a resistor only resists if power is running through the network. These metallic clusters resist the force of whatever runs through them, signaling a complication in flow; a loop where fluid must slow down like blood clots or rush hour traffic.

“I’ve been trying to bring out the body underlying mechanical or technical objects,” says de Broin, “and incarnate machines as though they are alive.” Indeed in these works the machinic collides with the organic in a movement that both humanizes the hard machine, and mechanizes the soft body. Although typically used to carry water, these copper pipes entail other kinds of flow too, from oil and gas, to bodily fluids, capital, immigration, dreams and desires. The Anomalies as he calls them, elicit a sense of empathy. We imagine the pipes might feel some pain or discomfort from being all tangled up.

Displayed on a plinth, the work titled Universal Plug In Play represent the opposite formation of a knot. Clusters of square and cylindrical openings grow in star shapes like crystals do out of the ground. Resembling technical attachments or adapters, the sculptures accommodate a grand imaginary network. “I was influenced by the Internet protocol that allows different devices to connect together with ease,” remarks de Broin. Rather than slowing down a substance, these universal adapters would allow for faster flow from a variety of inputs. Like much of de Broin’s work these objects point outward at the larger systems they belong to.

In a climate where fuel, water, and data rule global politics, de Broin’s knots and ports suggest looking more closely at these flows and the roles of individual bodies. As the world hits record highs for carbon emissions, Russia is busy installing a natural gas pipeline under the Black Sea, and the United States plans to open new public lands to oil and gas drilling. Resistance seems futile amid the interests of powerful industries, and yet individuals do take to the streets, amassing into blockages and influencing policy. While de Broin offers no answers, the knotty sculptures can be see as an attempt to resist the current, and foreground the human body as a locus of power, potential, and social responsibility.

Michel de Broin’s new sculptures were on view at Division Gallery in Montréal from September 13 – November 17, 2018. Upcoming exhibitions include an installation of de Broin’s Thresholds (2017) at Âjagemô in Ottawa, and Deviations, an intervention in three of Vancouver’s parks for the 2018-2020 Vancouver Biennale.