City of Mississauga, Ontario (Duke of York Blvd. and Square One Drive)

Oversized roadside signs along suburban routes advertise motels, restaurants and gas stations; they may reach the height of several stories while advertising little more than a snack bar. Their relationship to these sites is often disproportionate, which subsequently makes their sculptural qualities so appealing. The size of these arrows is not defined by the actual size of the site or object they refer to, it is rather the size of the roads and highways and the speed of passing traffic that dictates their scale. In this way the arrow can be read as the most reduced symbol of a cartographic annotation beyond scale. In the face of readily available high-definition satellite photography and street view maps, the arrow bridges the real and the virtual and creates an enhanced reality. With this sculpture the arrows do not single out anything in particular, but their density creates a place, while simultaneously signaling beyond it.

As the sculpture transforms the traversed space of the roundabout into an illusory map, it also points at the endless possibilities. The arrow is a didactic instrument that communicates, directs, guides and gives sense. It explains and specifies. It validates. The arrow is a tool of persuasion. Like the pointing finger of a questioning child, this sculpture will create curiosity and it will propose to ask a multiplicity of questions in an attempt to reconsider assumed direction and premeditated assumptions.
As dynamic vectors, the arrows obviously correspond to the movement and flow of the roundabout traffic, but they point beyond the potential infinity of the automotive circumscription of the roundabout. In the sculptural density of the composition the purely abstracted signification of the arrow as a road sign is transgressed, the signs become one sign that signifies the density of the campus and its urban context. The roundabout itself creates spatial focus and enclosure; the sculpture recreates the occurrence of crossing directions and defines even more paths and possibilities. The arrows do not point out individual, disconnected paths, but rather the crossroads of each of these trajectories. The recurrently interlocking form stabilizes the sculpture structurally, but it also affirms connected plurality, and mutuality. In enhancing the metaphorical crossroads of the roundabout. (Text from Thilo Folkerts and Michel de Broin) 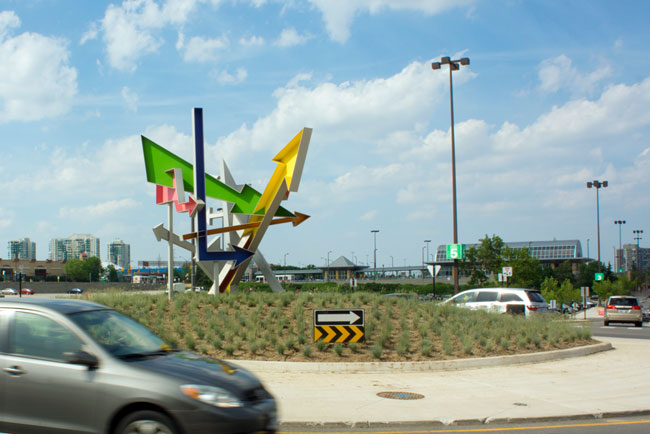 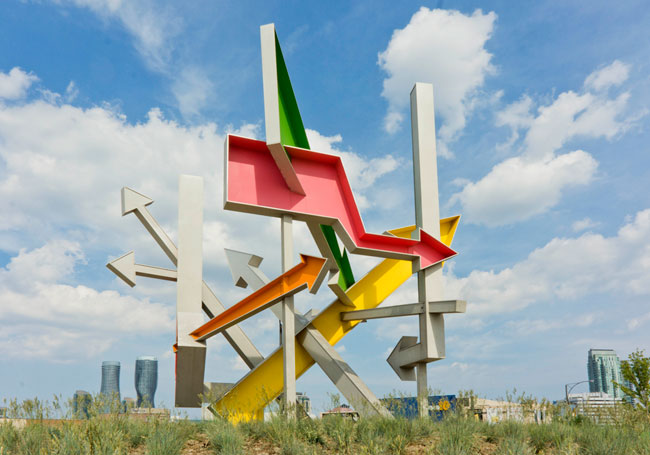 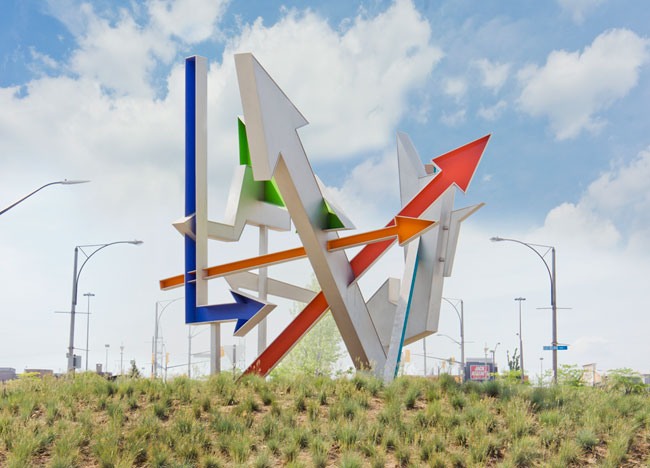