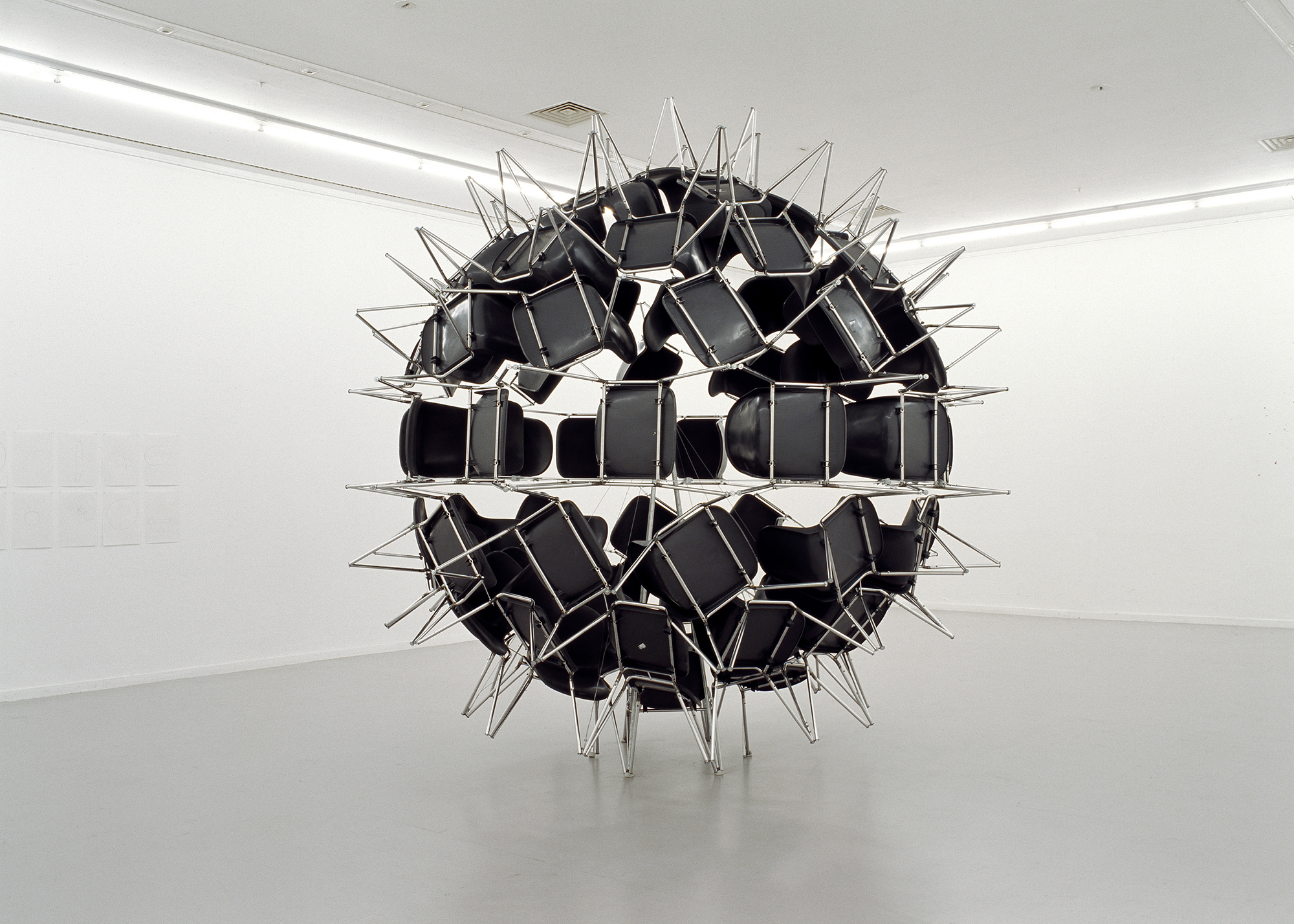 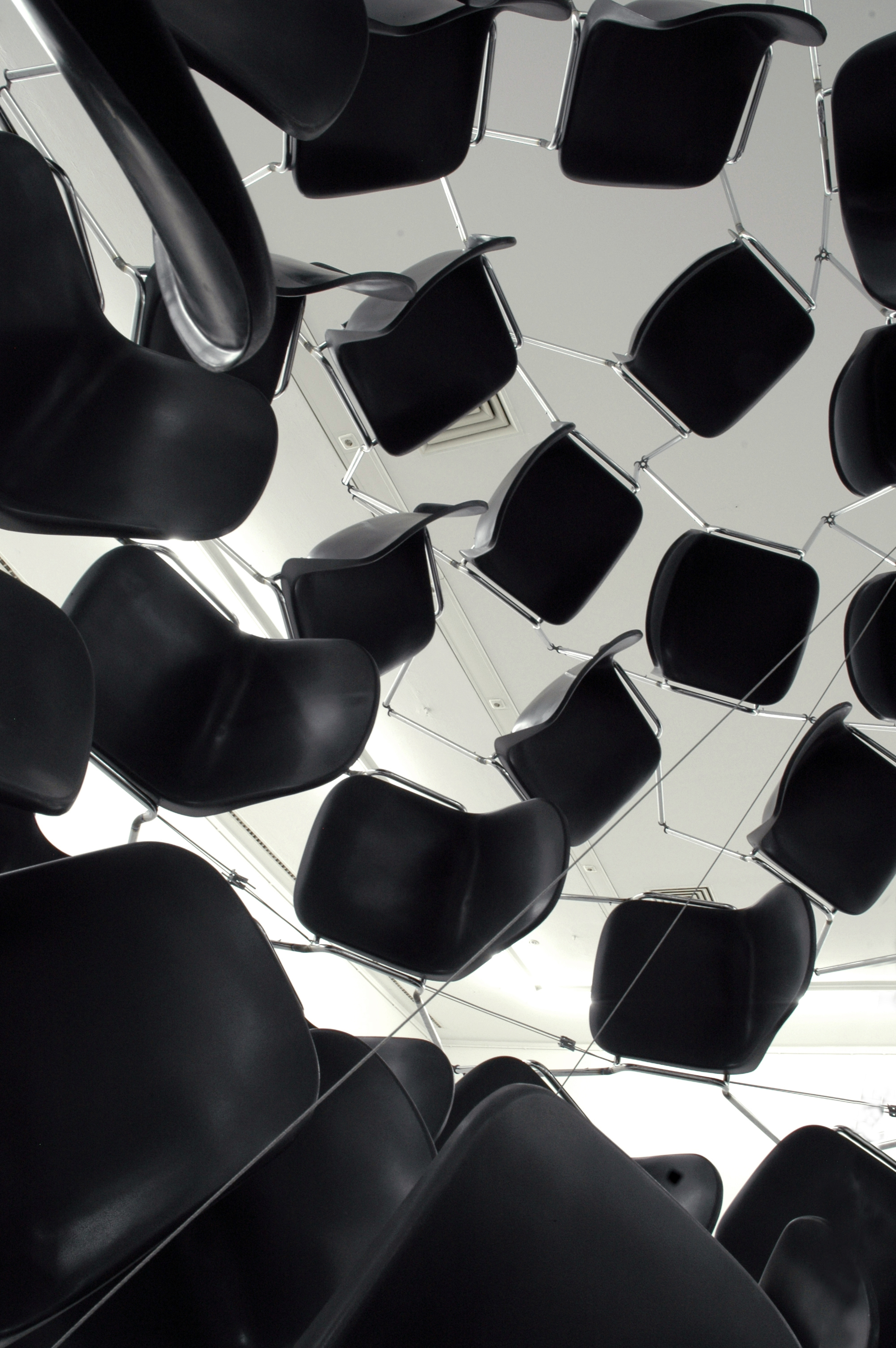 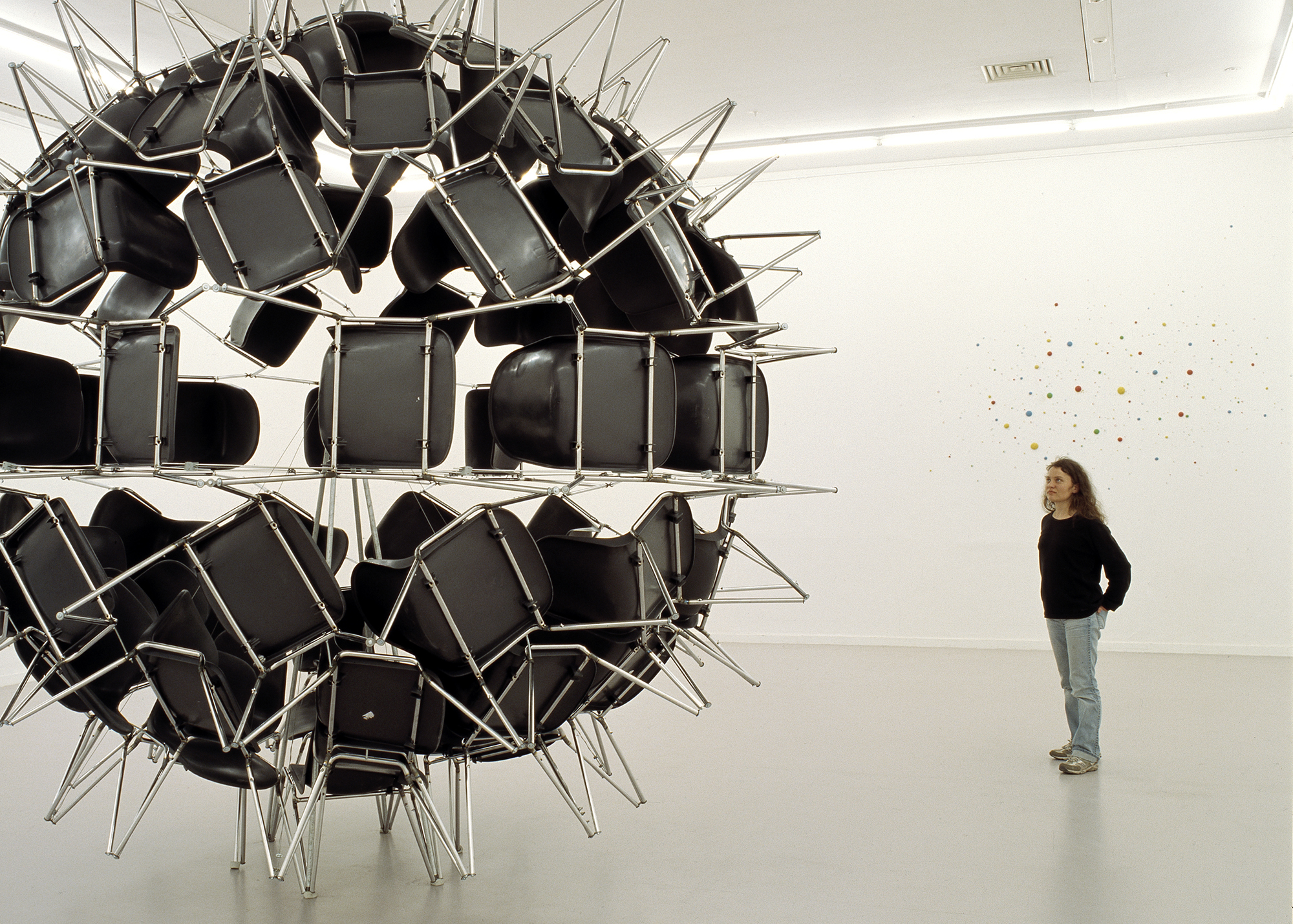 The sculpture consists of 74 black conference chairs  conjoined at the feet so as to form an imposing sphere that ensures an equal footing between each of the parts. The free-floating seating arrangement endows the chairs with a solidarity that underpins the cohesiveness of the spherical whole. Through the absence of any discernible up or down, and the equidistance of each chair from an empty centre, hierarchy is abolished and central authority evacuated. This ‘conference’ can do without words as the ideal speech situation is already functionally and structurally inscribed in the sculpture: there is a co-equivalence between the individual chairs as furnishings, which fully retain their functionality as indexes of human interaction, and their assemblage into an architectural structure that creates an arena for exchange. The chairs essentially remain chairs, and this regardless of whether they are viewed as modular elements or as a whole that is greater than the sum of its parts. Here, architecture and furnishings sit side by side, so to speak from a position of perfect parity. The chair’s legs act collectively like an immune system by kicking outwards to prevent boundary violations and to secure its survival.  In this sense the sphere circumscribed by the assemblage does not produce an empty space around which to gather, but a defensive devouring vacuum.

By virtue of the vacuum at its centre and the exclusionary topology at its circumference the sculpture produces a paradoxical space that simultaneously offers and cancels the conditions of utopian communication. The “Black Whole Conference” can house such exchange but only if it remains shut within the shroud of secrecy called for by this security endosystem. However from the perspective of a health and security ideal, the system is undermined by the communicational necessity of commingling and transparency. This sense of paradox is further underscored by the cohabitation of the homely, down-to-earth assembly of chairs, and the intergalactic space exploration dimension insinuated by title’s black hole and the sculpture’s likeness to a space capsule. The announced conference is thus at once close to home and at the edge of the unfathomable; open to communication and yet closed to contamination; well settled in its familiarity and human scale and yet astronomically mobile and strange. In an ironic and paradoxical way the “Black Whole Conference” invites these quintessentially modernist utopian conceptual spheres to compete for quarters in the confines of a single manifest sphere. Though this overlapping of macro-micro levels warrants references to the public sphere of a Jürgen Habermas, the spherical metaphysics of a Peter Sloterdyk, the utopian geometry and spaceship dreams of a Buckminster Fuller, none of these can take up exclusive and extensive lodgings here. Whatever the referential explorations and conceptual extrapolations that one may throw against the whole sphere, in the end run it obdurately defends its concreteness and expulses any final attempts to seize the meaning hovering in its holed up centre.