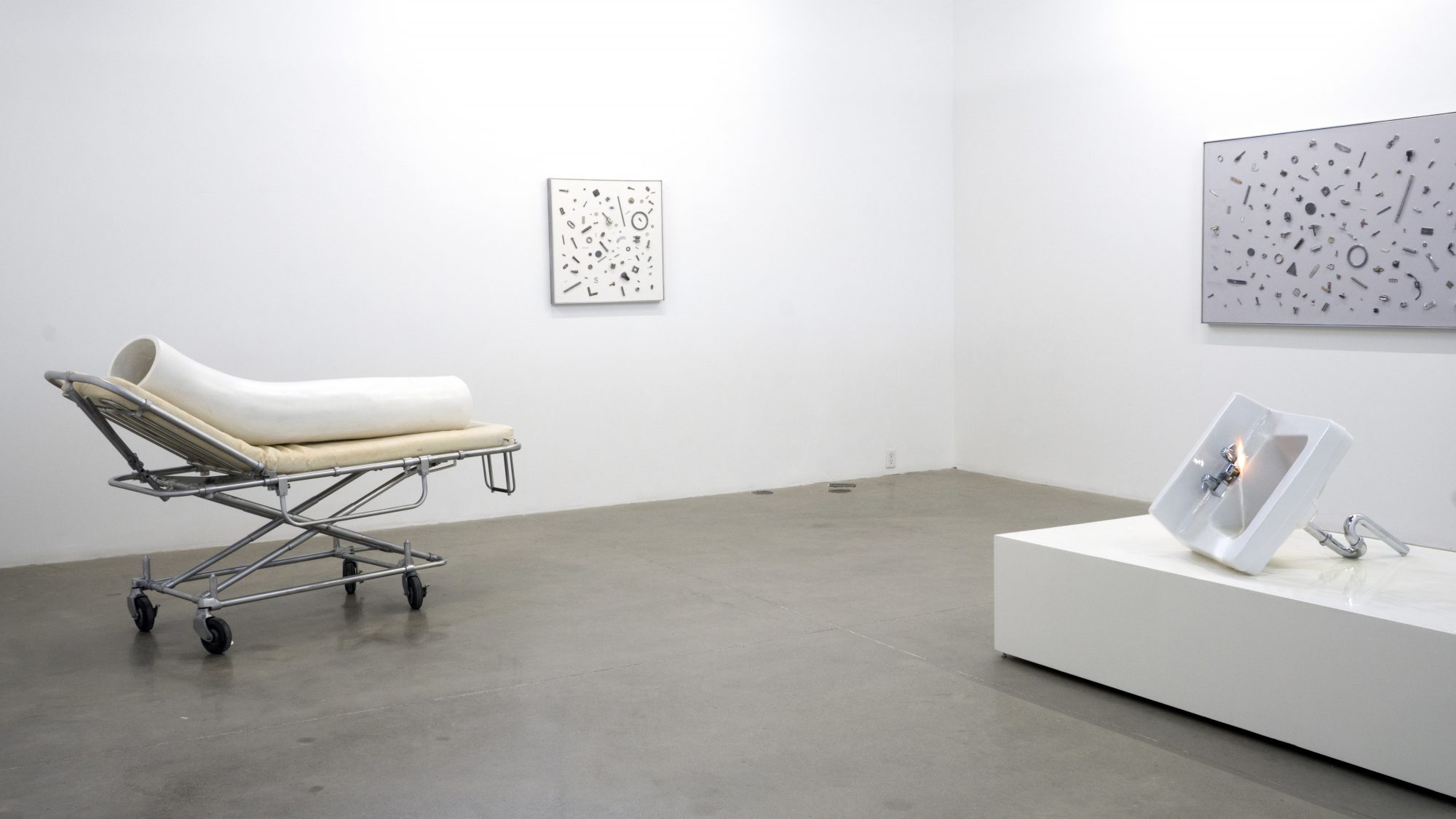 This and That   [2016]
Gallery Division, Toronto
An emphatic turn towards objects, the non-human, things, and their meaningfulness has swept contemporary philosophical discourse. Despite our phenomenal relation to everything we see and everything we touch (and what touches back, felt or not), a relation colours our world—or at least the discourse surrounding it. And so, it seems we must learn to thread a newly demarcated, yet unknowable, realm filled with objects personified, openly at play. For the past two decades Michel de Broin has set up his studio in this shadowy world where objects and their social dramas are chief actors. While our current moment asks us to imagine the inanimate personified, de Broin has been doling out objects that lay bare their machinations over the course of his prolific career. These sculptures do not go so far as to dance on their own, much like Marx described the fetishized commodity doing, but their plastic, metal, painted shells certainly cannot contain their forms. Performing beyond their expected function, albeit poorly at times, these unsuspecting cousins demand a longer consideration than those objects bound to their meaning. In tour de force a tire wrapped into a concentric knot cannot power any motor vehicle, while no less recalling the immense and unknowable force of a black hole. This and That’s accretion and accumulation of images and objects belies the vertical thrust of possession. Everywhere we turn a non-systemic torrent of relations is at play, connecting objects in an indeterminate network, one that bridges de Broin’s career from past to present. This uncanny field where objects are in conversation, confronting one another through a shared language of dysfunctionality, is one carved by alternative paths to meaning and value. (Loreta Lamargese) 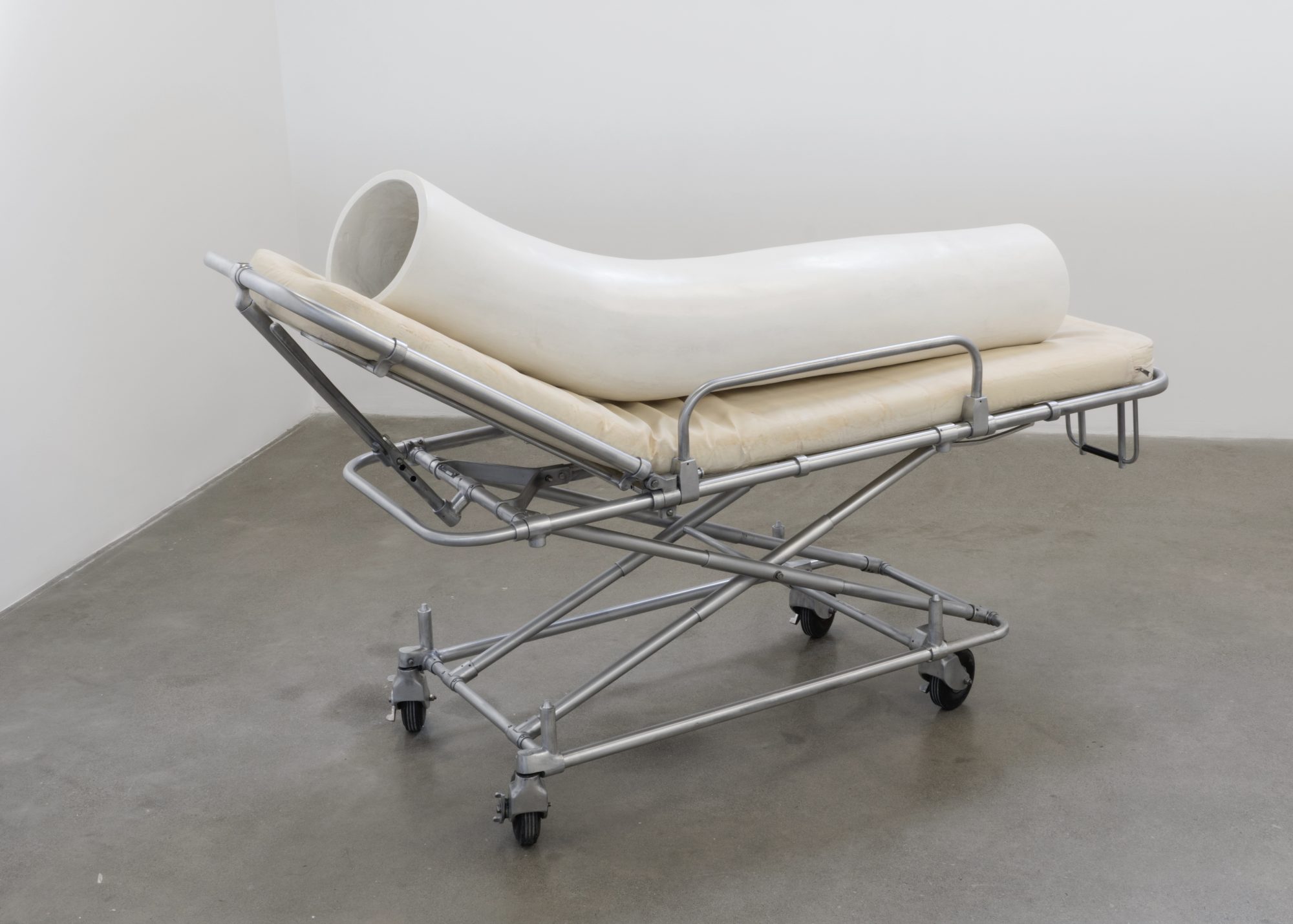 Tube   [2016]
Plaster, mattress, aluminium, 55 x 182 x 81cm
A large tube of plaster reclines on a gurney, its form suggestive of an anonymous body, its solitude and vulnerability an appeal to a certain sense of empathy. The naked organ might evoke plumbing, or a segment of a circulatory system cut out and isolated from its network. Although the wide, end-to-end opening blurs the line between interior and exterior, the object conveys a sculptural mass, a material weight whose singularity distances it from a medical association. The tubular form’s intriguing character is reinforced by the uncertain void visible within each orifice. Tube puts in high relief the artist’s proclivity for unpredictable assemblages and his search for new sensory configurations. 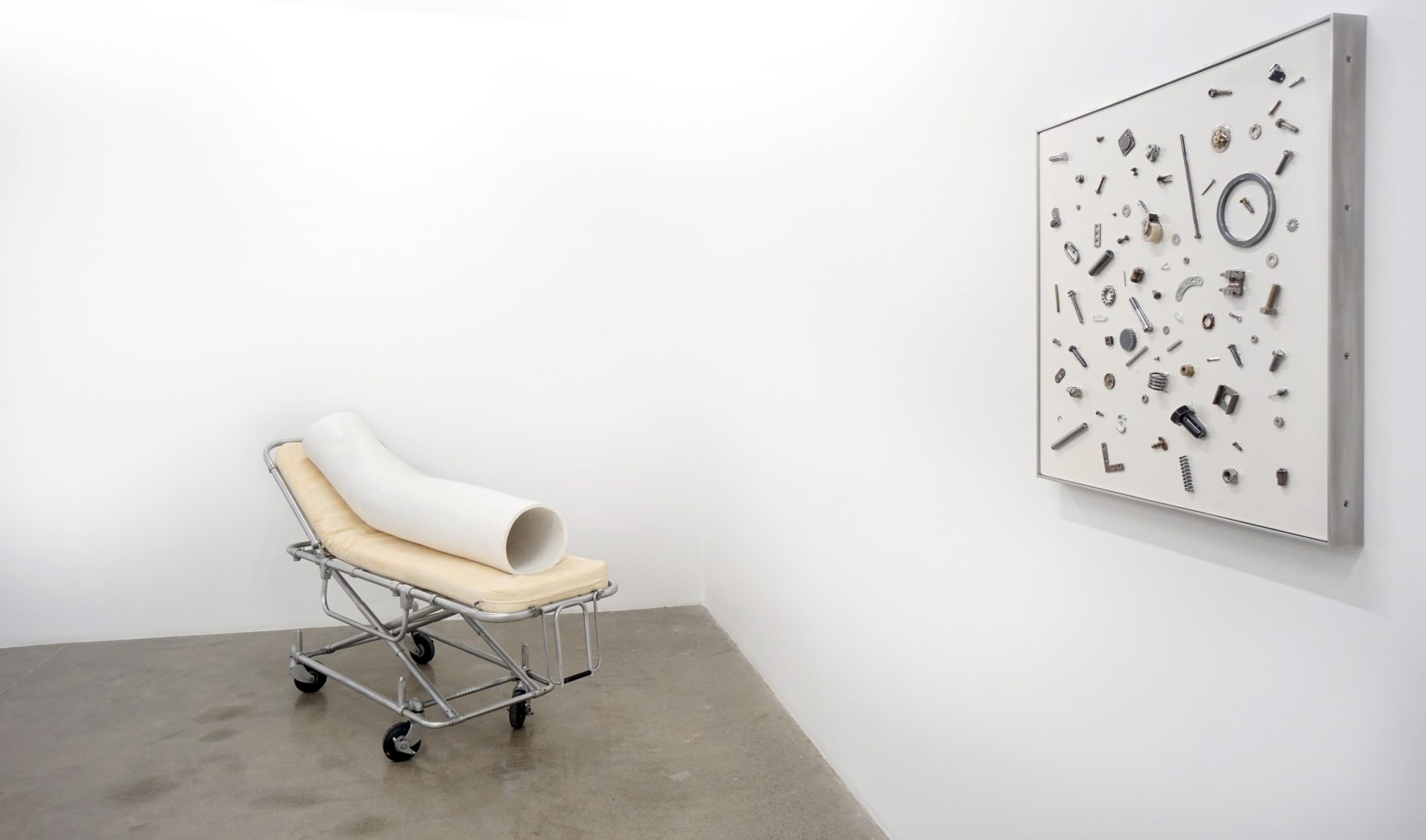 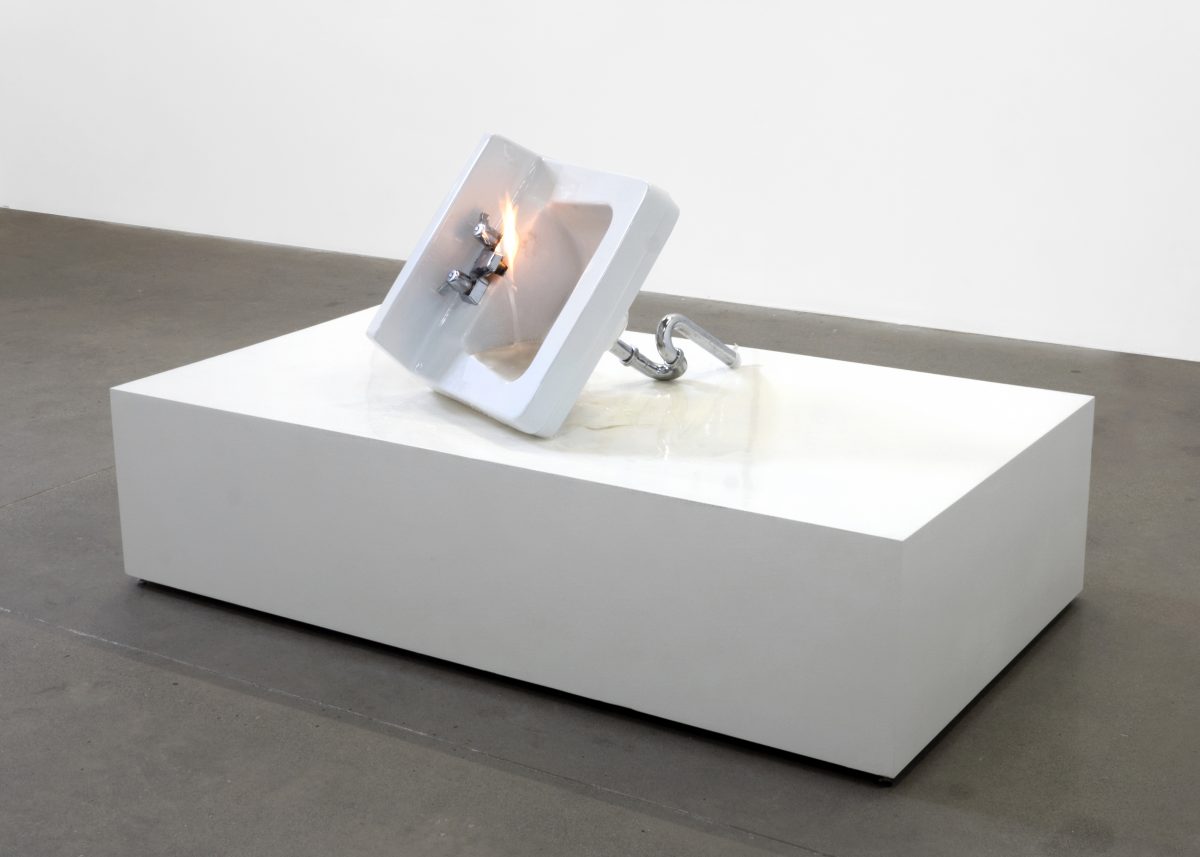 Étant Donnés
Sink, plumbing pipes, water, propane gas, 166cm x 92cm x 46cm
A mixture of water and fire flows from a sink lying on its side. The co-existence of opposing elements manifests itself in a familiar object rendered uncanny. 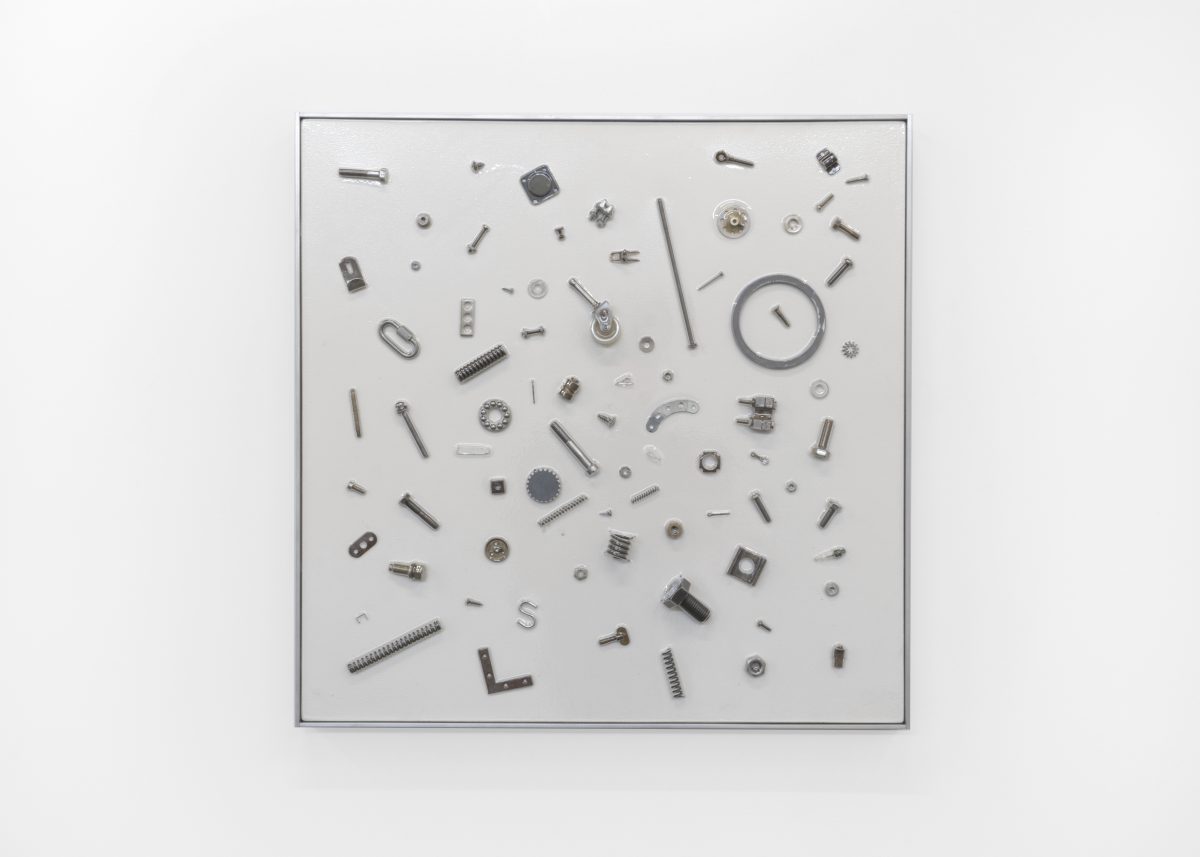 This and That
Metallic objects, thermoform on wood panel, 61 x 61 cm 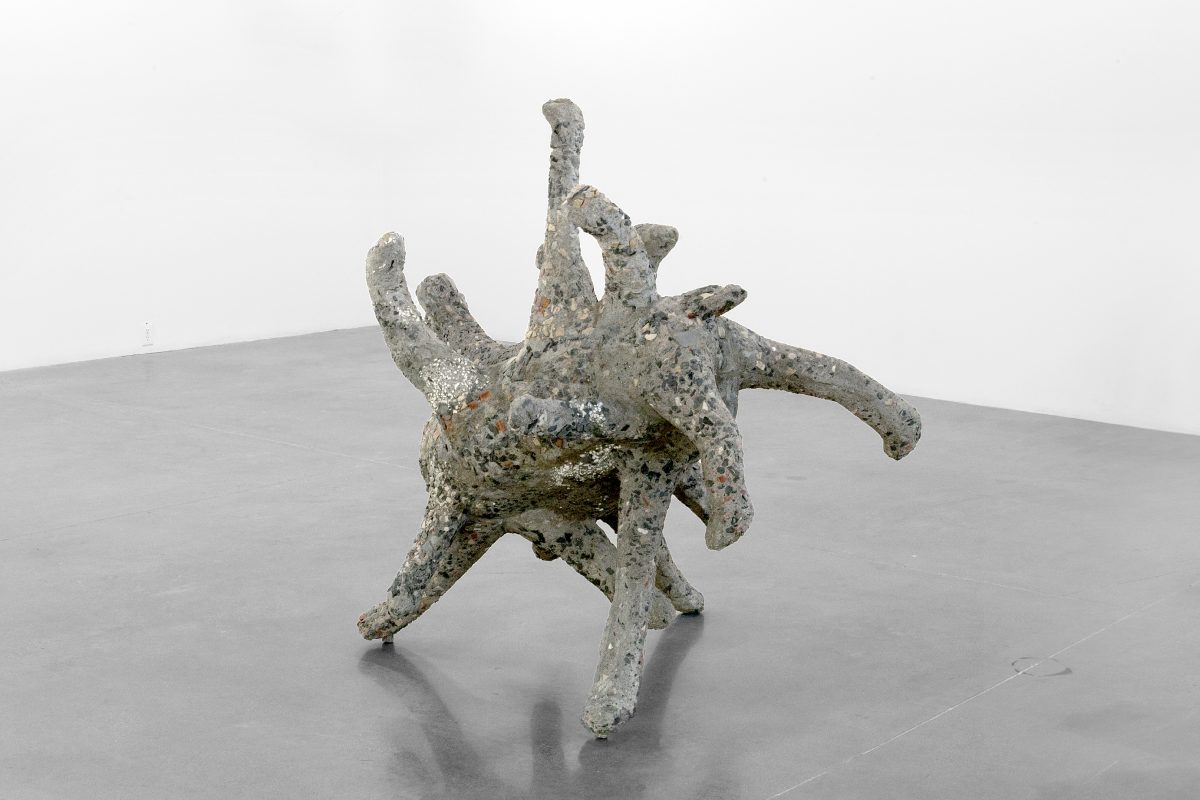 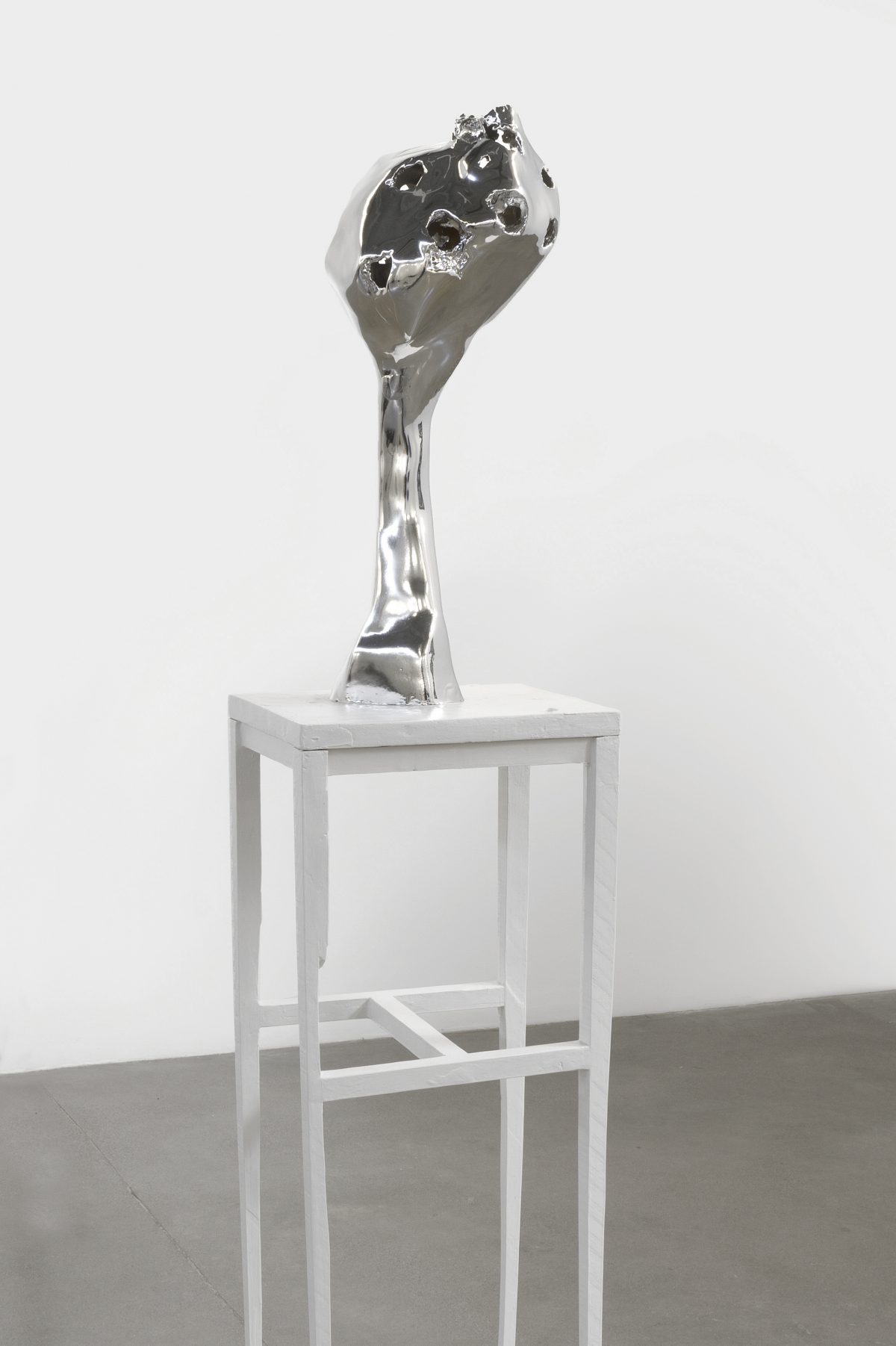 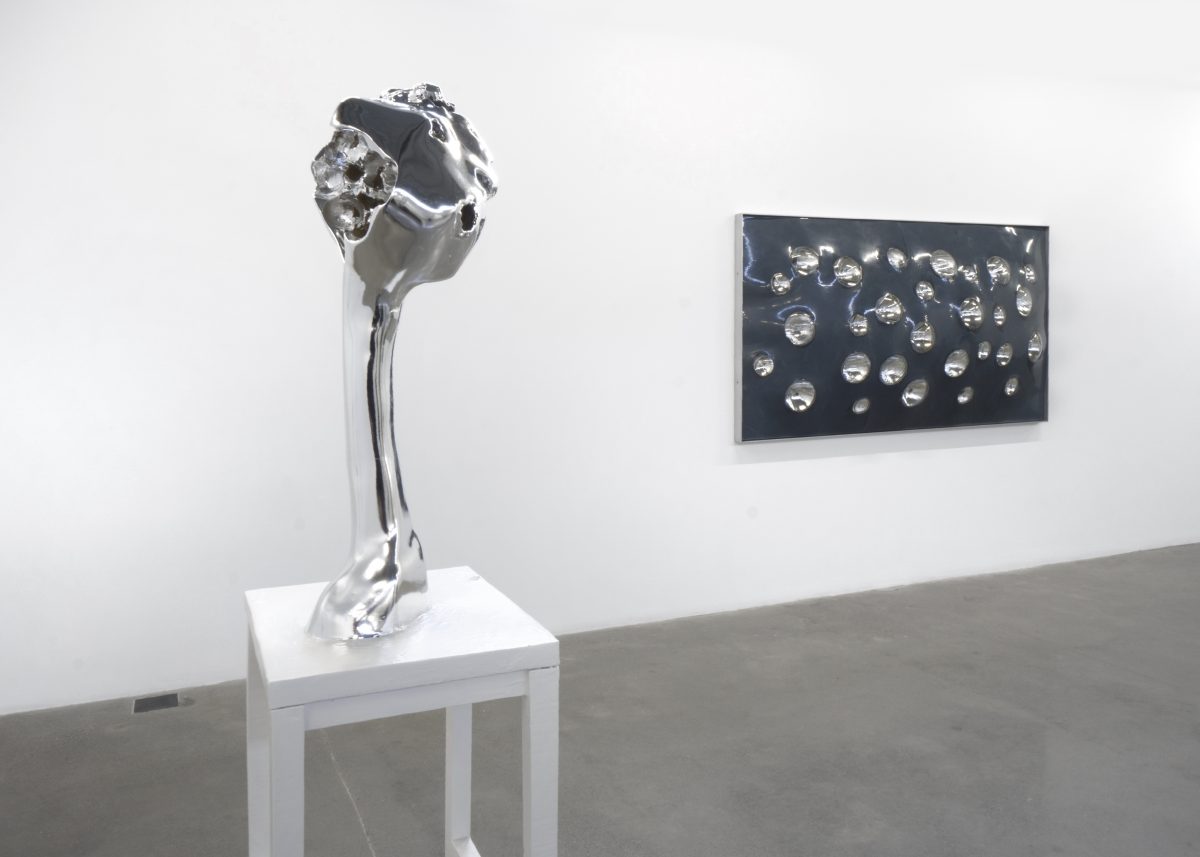 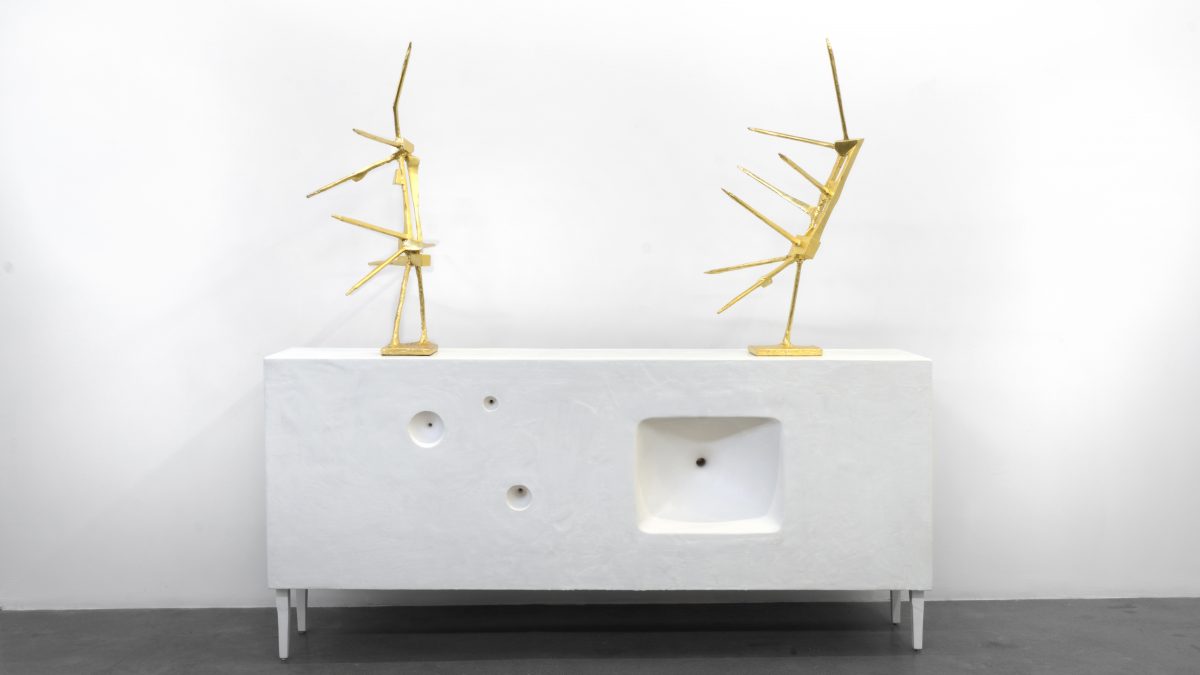 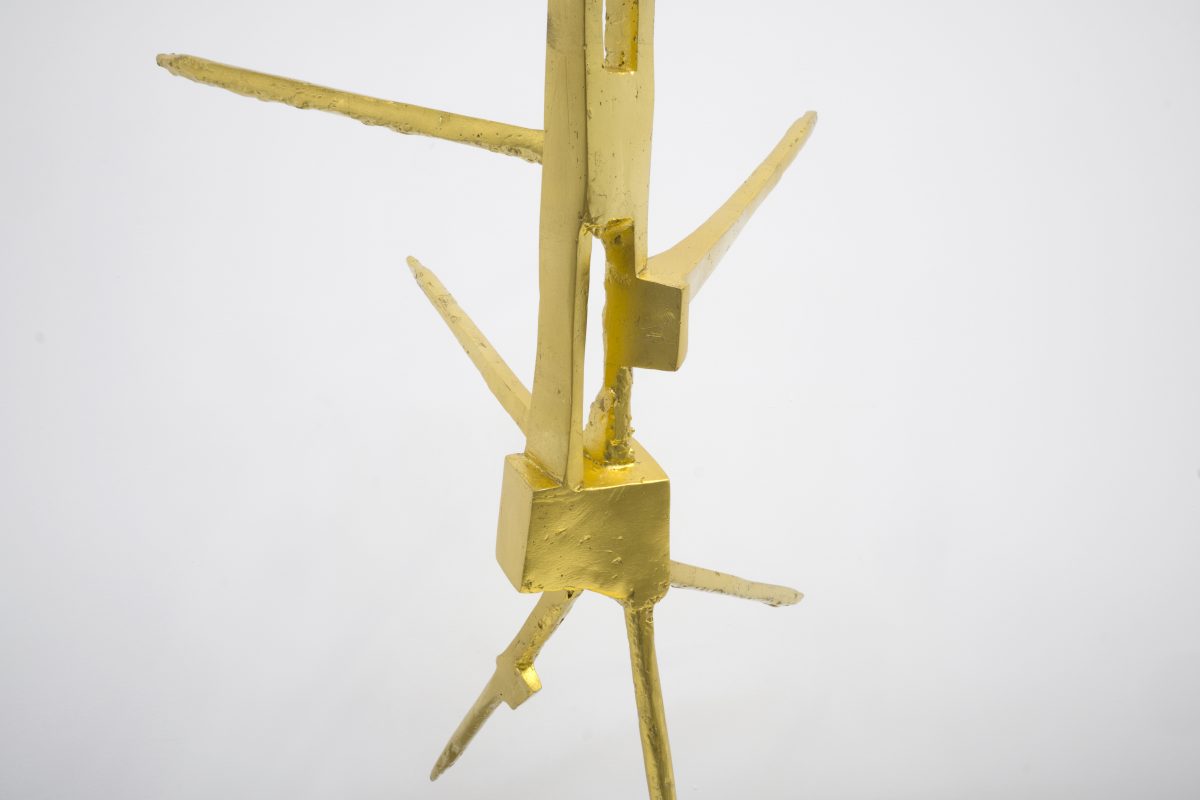 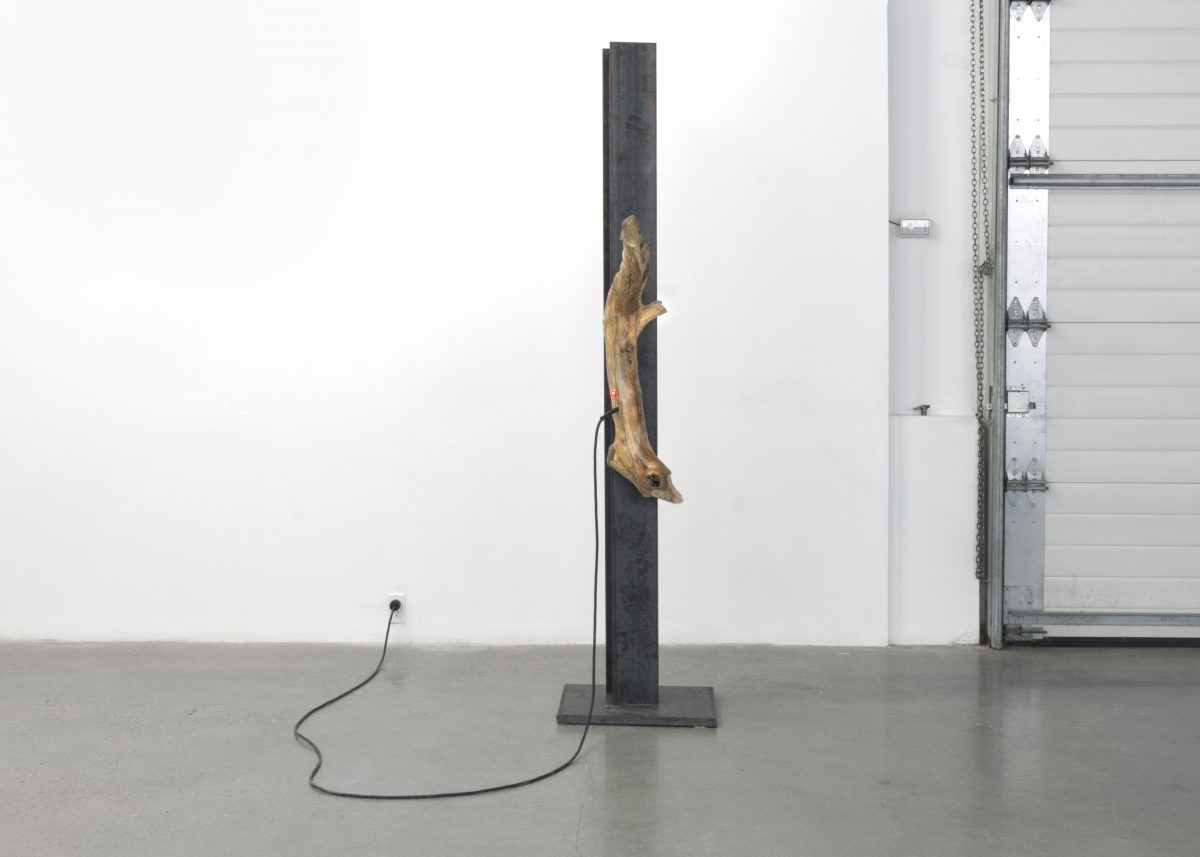 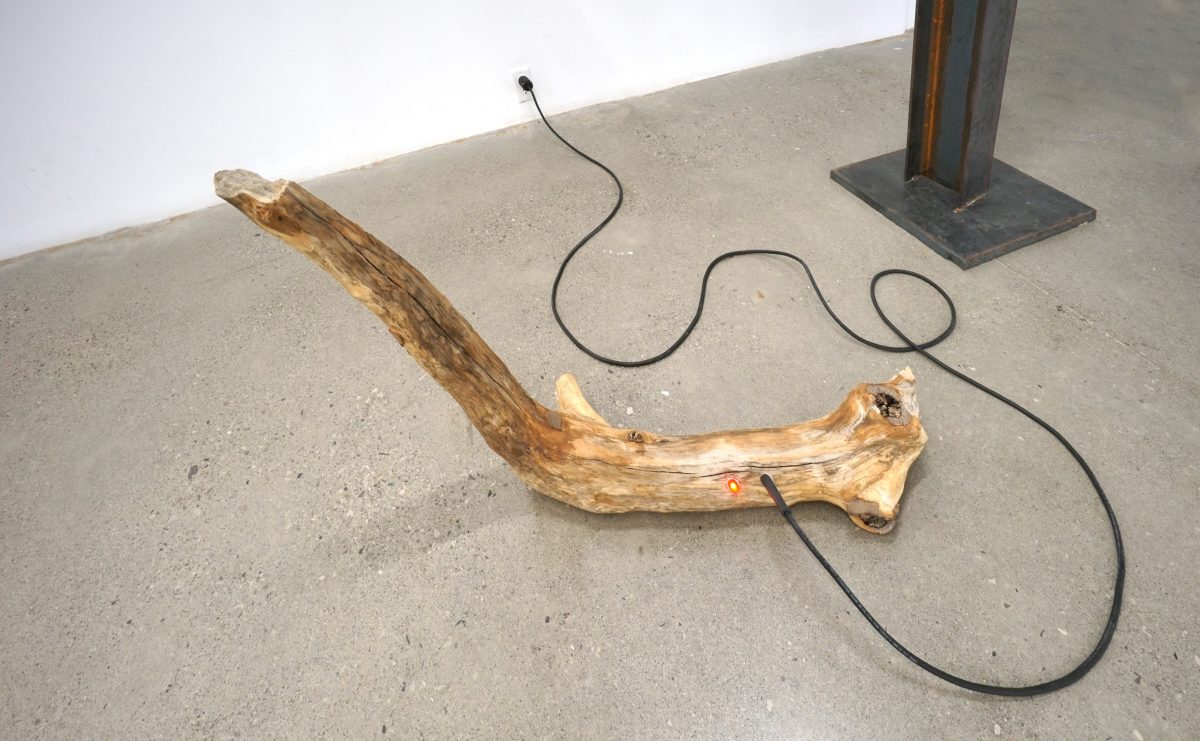 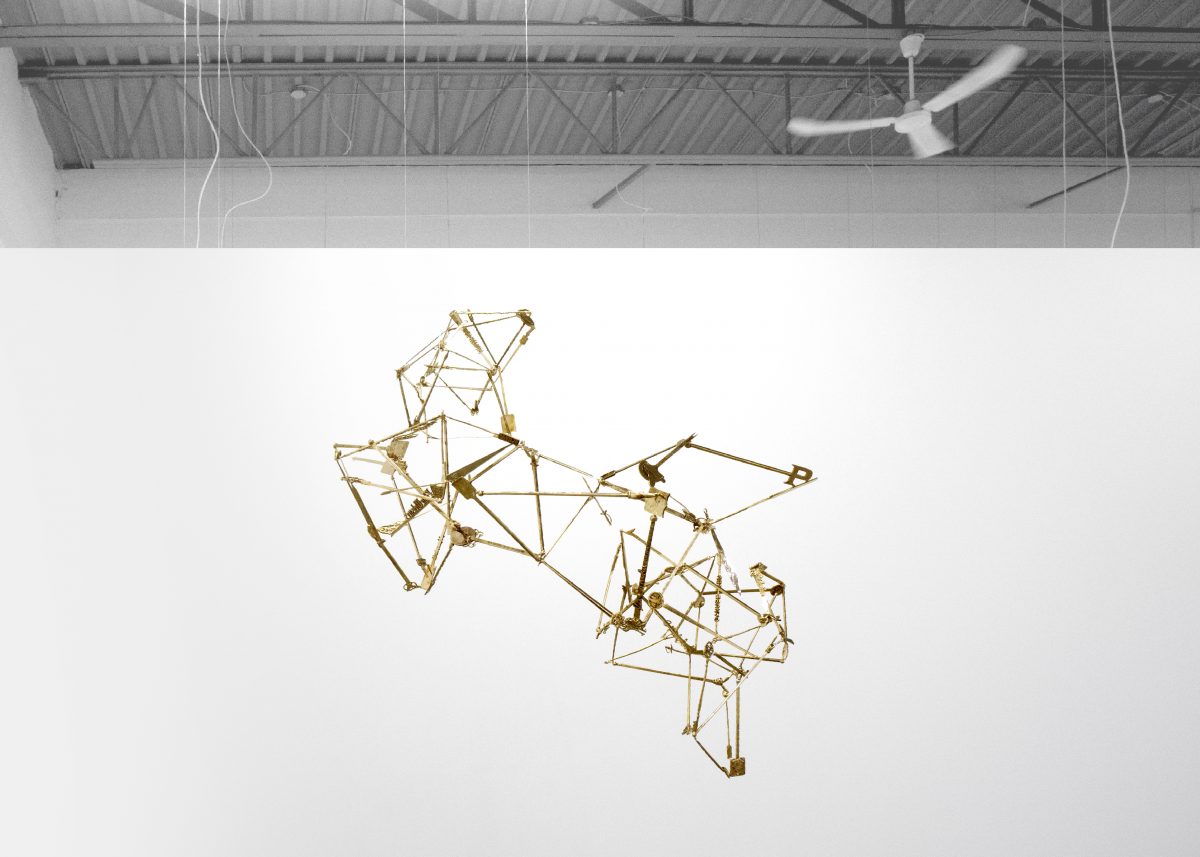 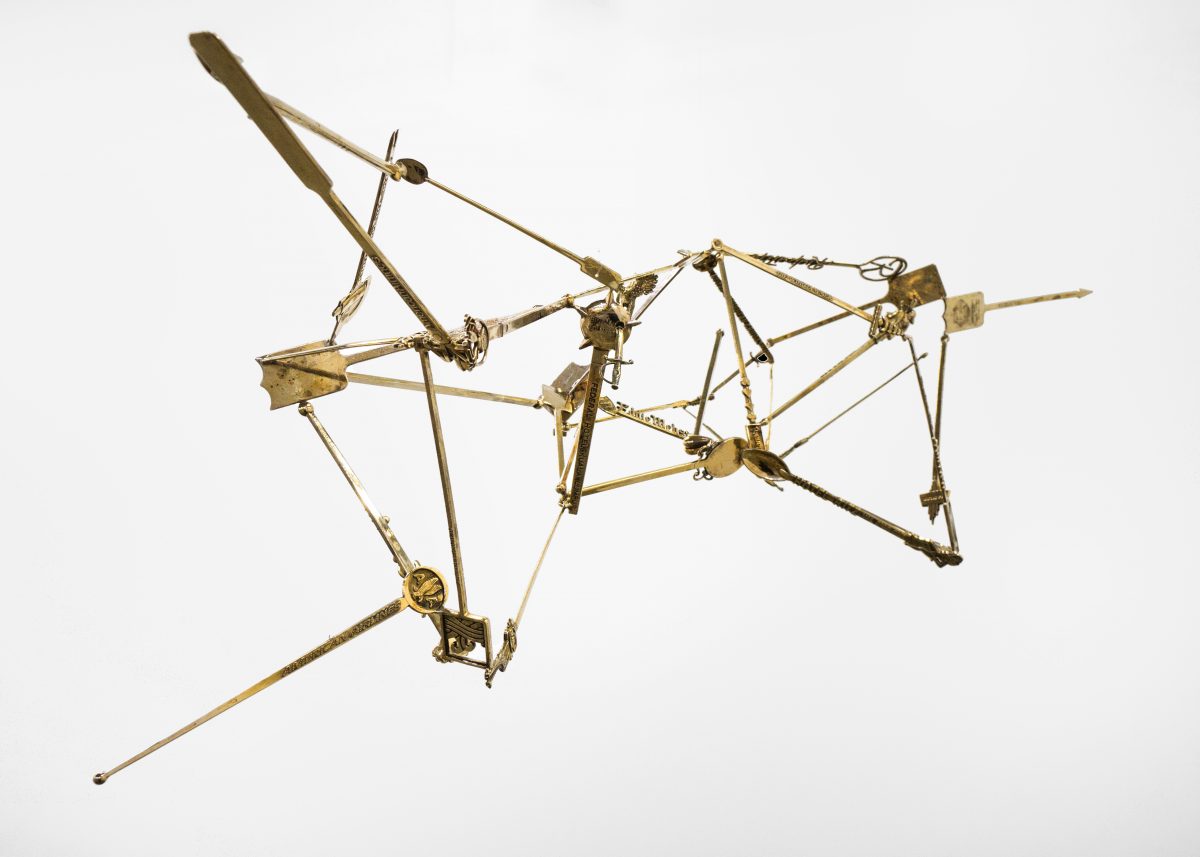