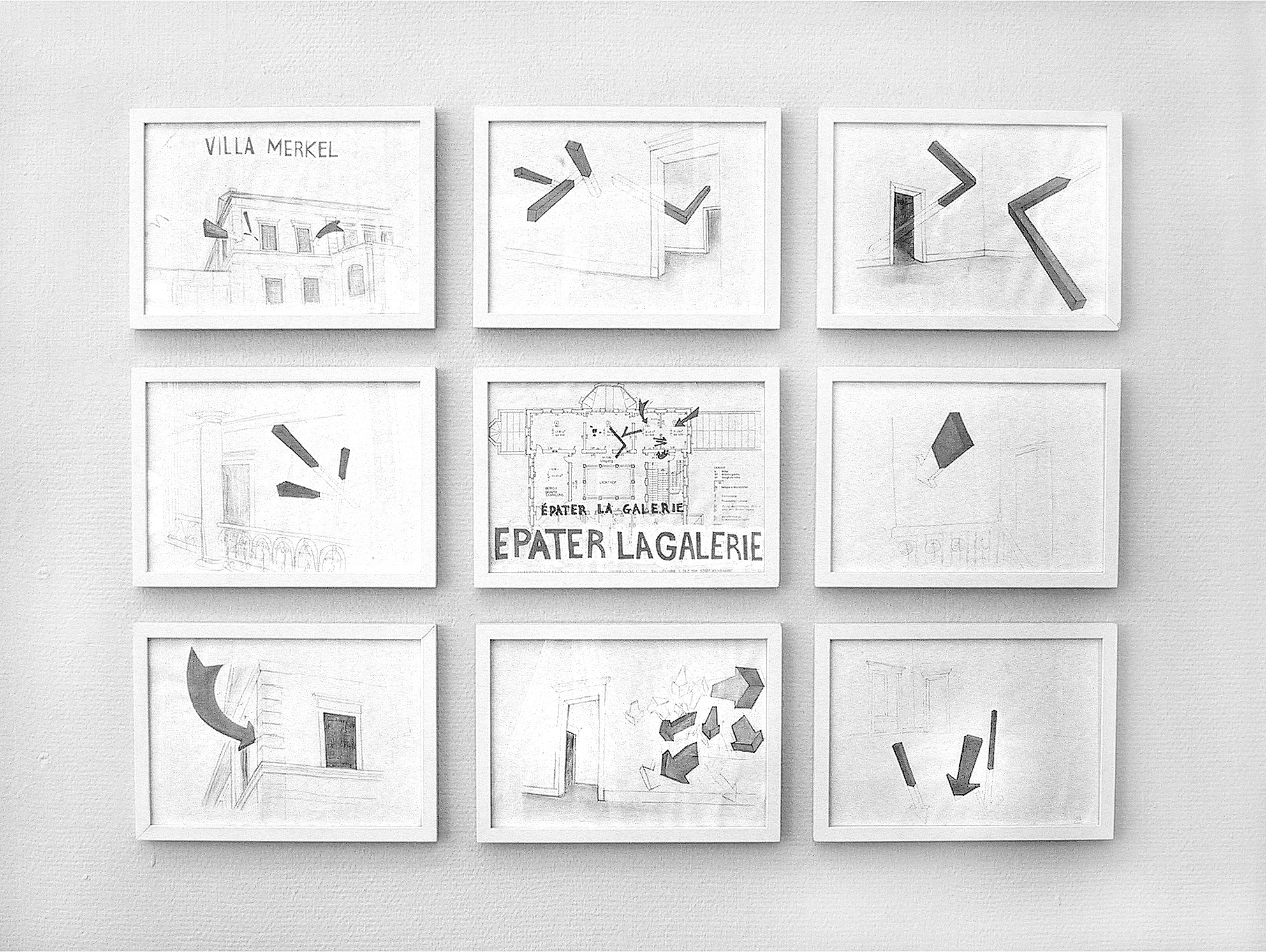 Colossal arrows have been erected alongside buildings in order to indicate to passers-by the precise location of things: “it is here”. These arrows are often disproportionate with respect to the places they designate, for their scale is defined not as a function of the importance of the indexed site, but is rather determined by the velocity at which the viewer travels through urban space.

An arsenal of luminous arrows was installed to invade the museum. This use of a stereotypical symbol of North-American consumer culture reverses our usual relationship with the institution. Here, the exhibition space becomes the object on view, run through and altered by all these arrows, which frame it and designate it as an object. 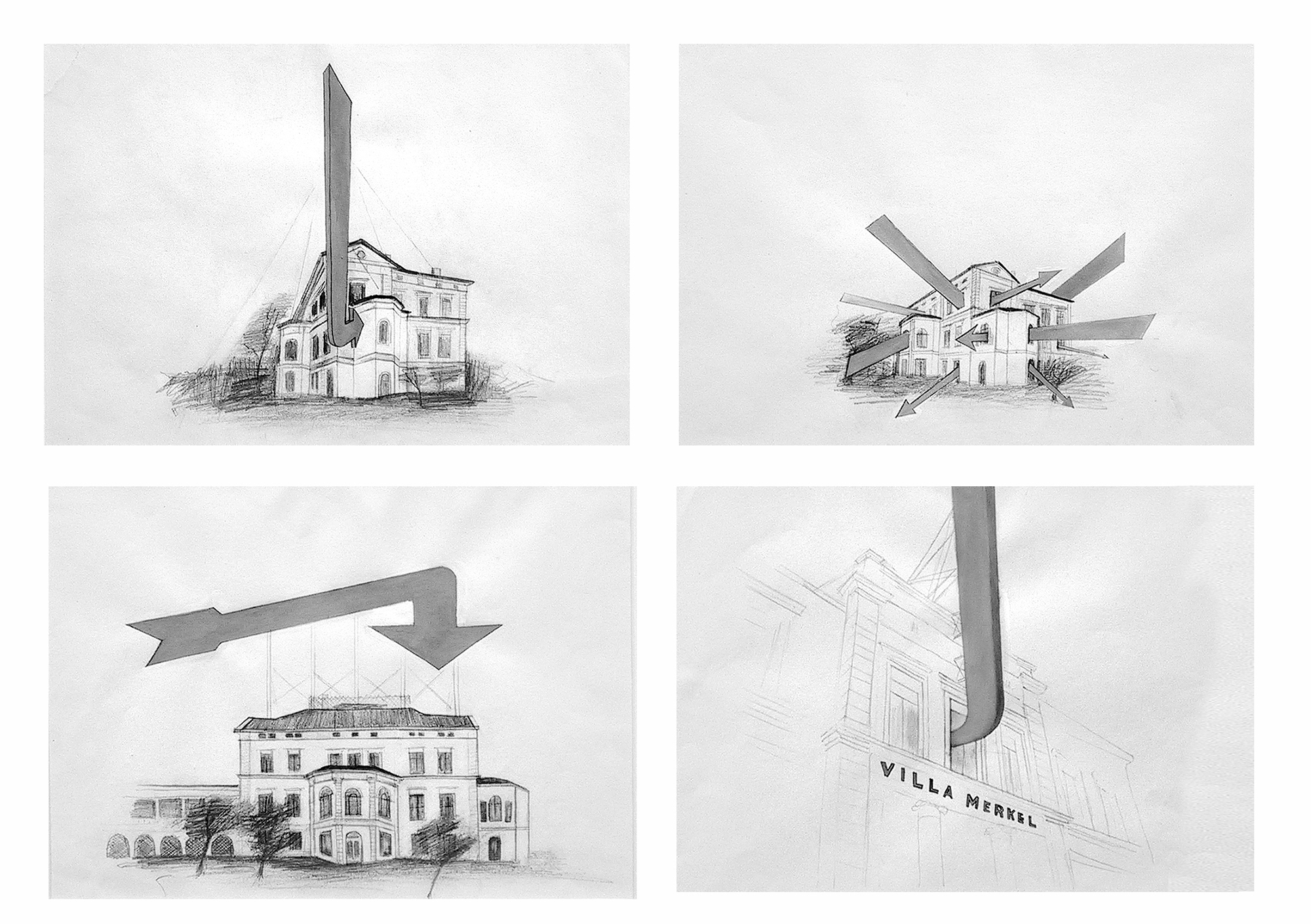 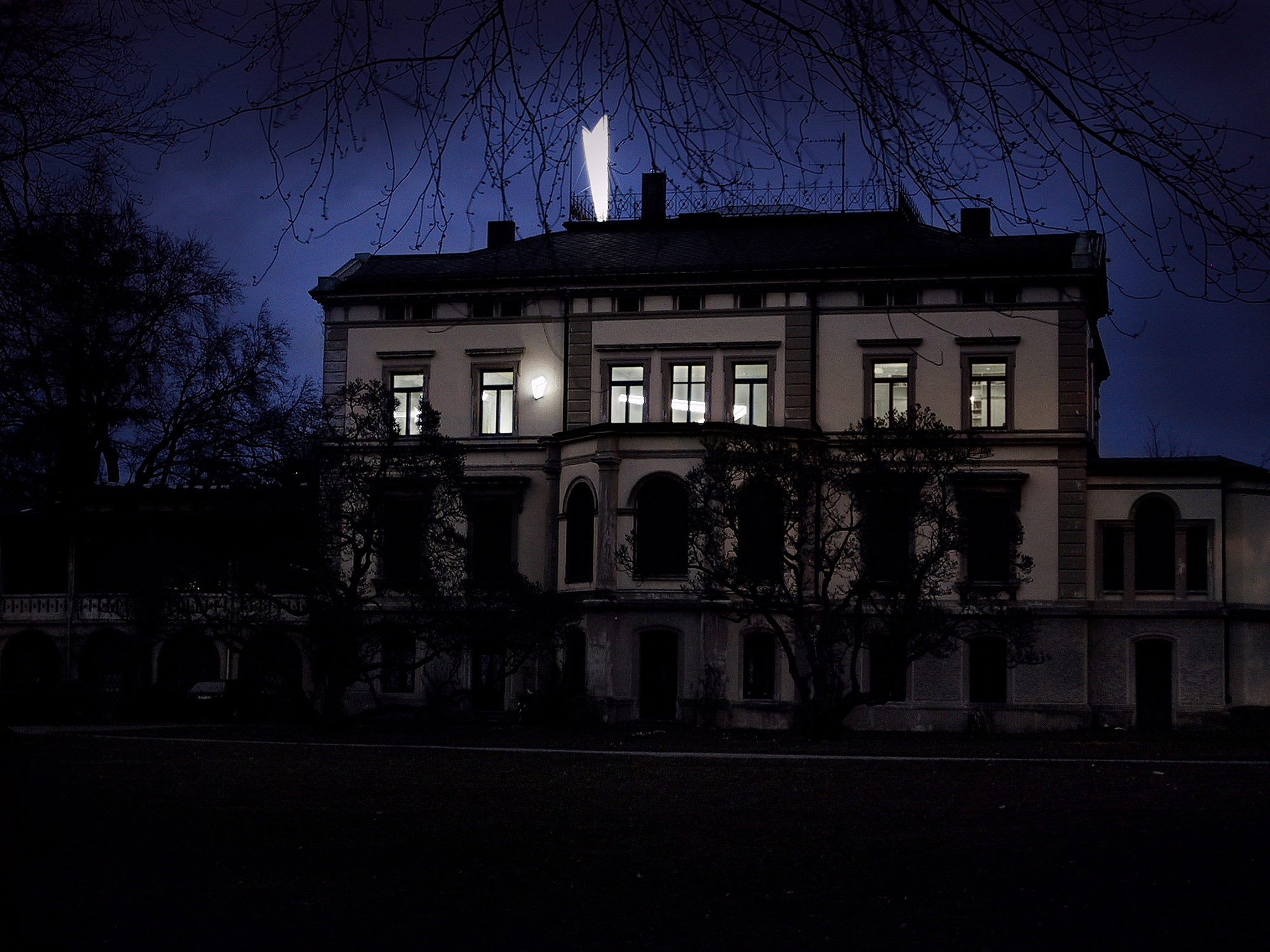 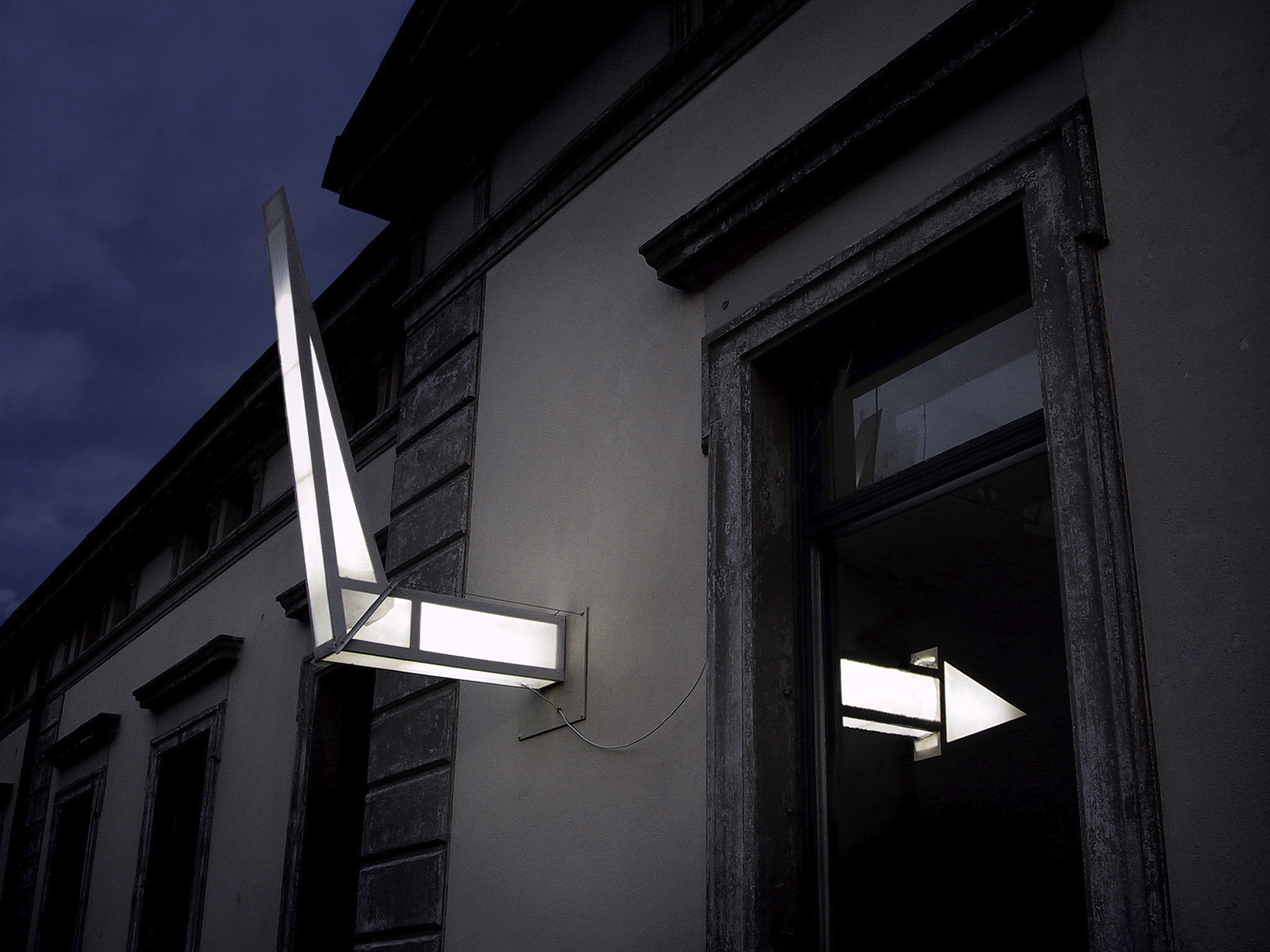 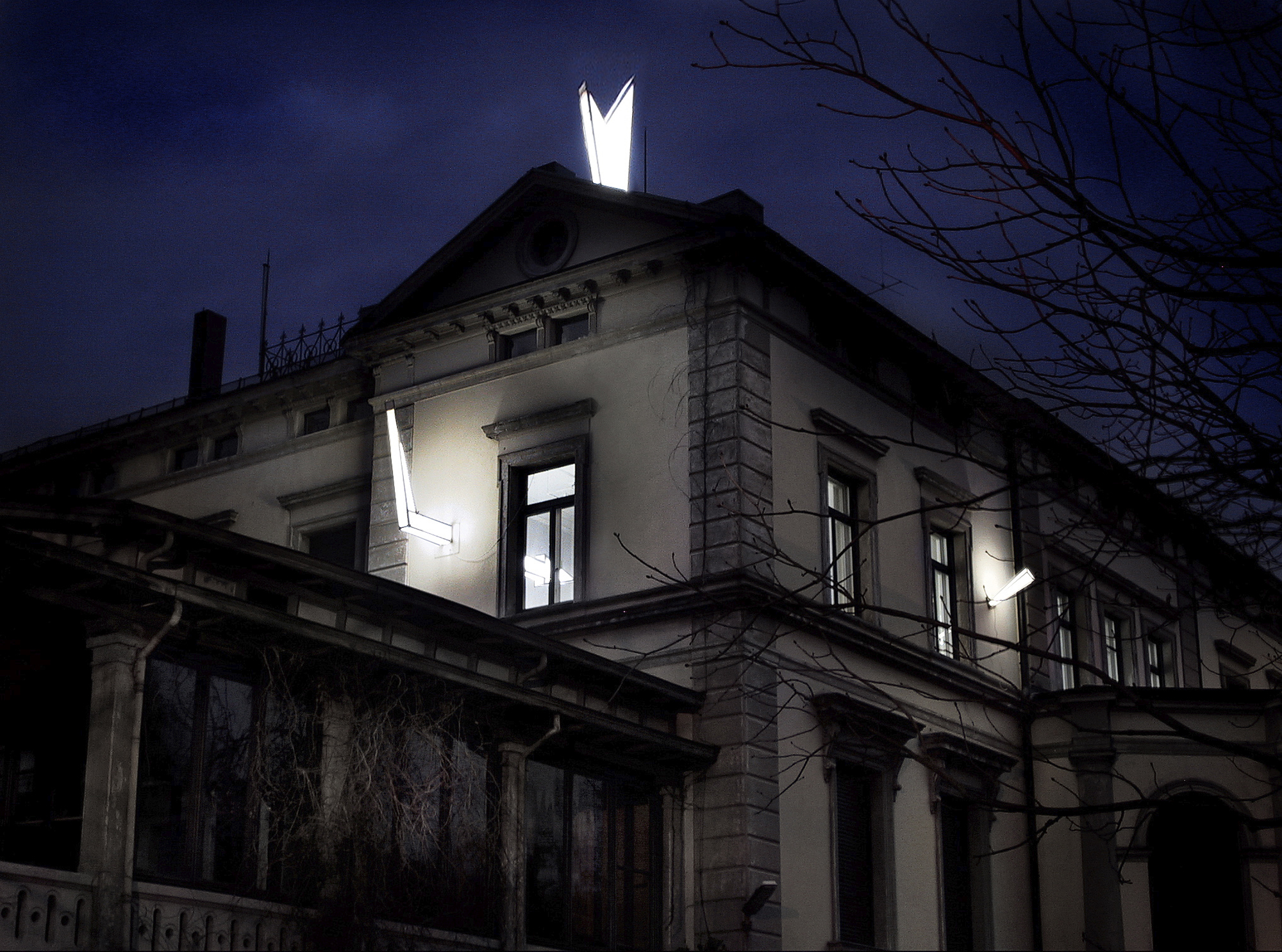 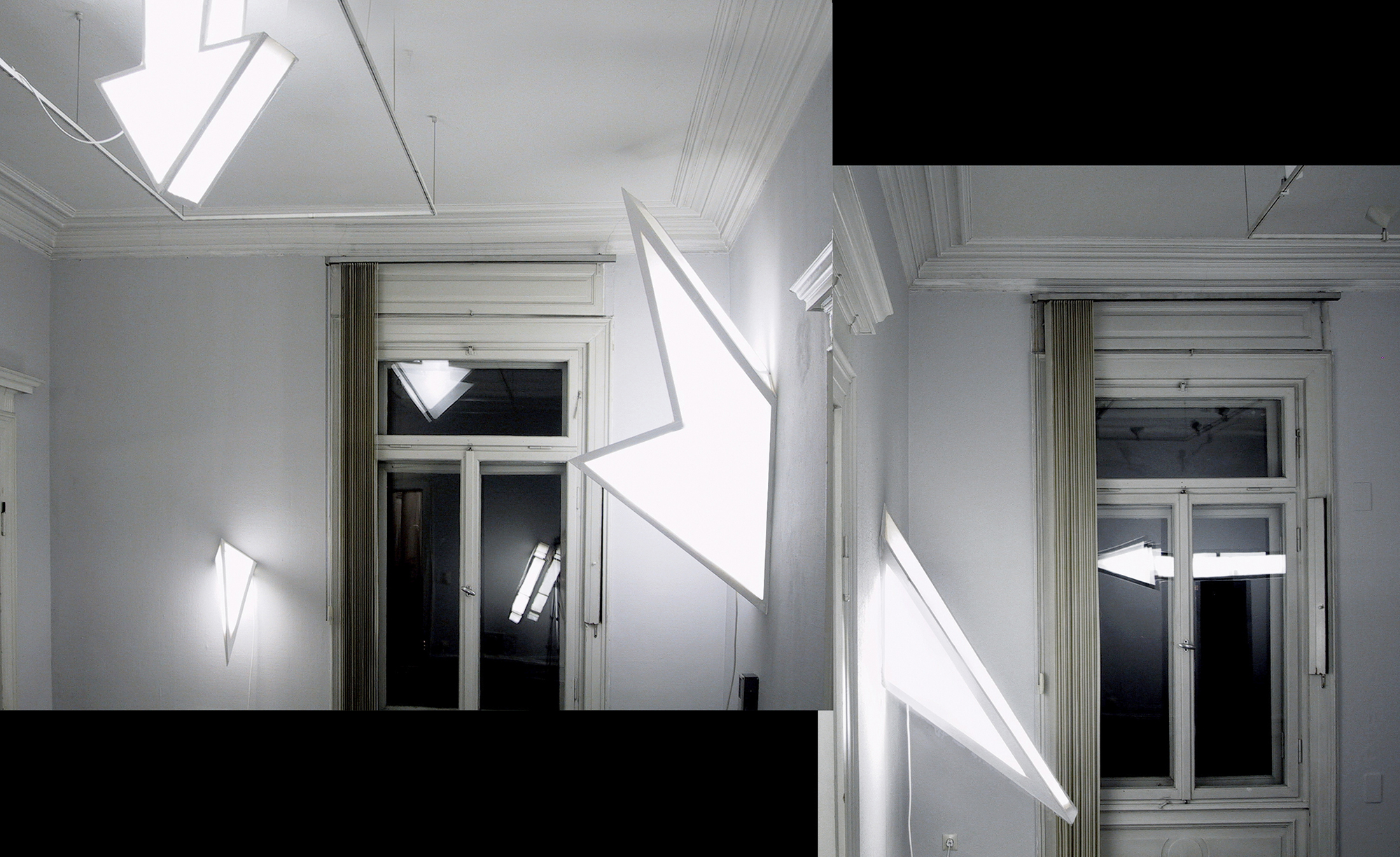 When, in North America, the automobile became a lifestyle—more of a mode of social circulation and exchange than a mere means of displacement—space and perspective had to be reconsidered so that the automobile could be recognized as the new subject, just as was the subject of the gaze in the classical era for politics, art, and culture. Mercantile culture thus invented a mode of designation directly transposed from the flat surface of geographical maps. Rather than having a word associated with a place on a map, enormous arrows were incorporated onto the sides of buildings to indicate precise locations to the automobile driver: “Here it is”. These arrows are often disproportionate in relation to the places they designate. They can be several stories high and yet may only designate a french-fry stand, as their scale is defined not by the size of the designated object, but by the speed of the automobile, the width of the roads and the necessity of transforming the traveled land into a map laid before the driver’s eyes. Today, these arrows are but archaic and useless vestiges of of pedagogical era. Every driver knows how to read signs; there’s no need to remind him constantly him that “Here, there is…”

But why not respond to this albeit useless creativity of the commercial sphere in that of art, where we are precisely in need of being told, now that we are in the dark as to the meaning of art:” Look here, this is it, there’s art here”. Michel de Broin’s artistic intervention, as does an assault or an invasion, encompasses the museological space of arrows, in order to identify the very place of art. But the arrows traverse walls, space, they disappear and criss-cross one another. Where does the art space begin? Where does the art begin? Within the museum walls or outside them? Are we at once “in” the art as soon as we step inside the walls? Is everything art within the assigned limits? The monumental arrows find functionality in the composition of new, fluid, moving, immeasurable spaces. And the visitor—himself a delocalised point—is the only remaining point of convergence of all the designations; he finds himself compelled, in his displacements, to produce these often impossible spaces according to the will of the arrows and according to this young artist’s desire and his game. Without any predetermined route, the viewer will be led to reconstruct the partially provided arrows, following the walls, looking out the windows, exiting the gallery to follow them in their traversal of the walls.

After all, what could an arrow along a wall possibly designate? The wall itself, the configured space, the service offered, the food served, the satisfied belly of the consumer? The commercial arrow is quite conceptual already. Art only reveals it by attaching to it the paradox of pleasure. The artistic arrow appears suddenly more concrete, now that it has been redirected from its function, as we can follow the trace, travelling along it, looking with eyes and body for the destination. It becomes incarnated in our movements and questioning. One could even argue that it posits the visitor as subject, not of the gaze, but as subject of displacement and configuration. And around this subject, the arrows, thus situated, allow the veritable spreading into the material space of all spaces, even the most paradoxical, that can be conceived of either geographically or mathematically.

This project follows an earlier project the artist developed around a road sign featuring a full black square indicting dangerous materials (SKOL, Montreal, 1999). There again, according to a revelatory schism, it was the functional sign that appeared abstract and conceptual while its artistic counterpart, referencing the pure and empty forms of abstraction in art, took on suddenly an ironic, concrete, functional and pathetic incarnation. Today, largely thanks to his double and paradoxical competence, both pragmatic and conceptual, Michel De Broin becomes engineer, and suggests another machine for producing concepts. The machine works on a system of suction and expiration through which a form turns inside out like a glove. It transforms the inside into outside in one immanent movement, according to a solid dialectic, and allows us thus to see in the work concepts as essential to the logic of thought as those of the ensemble, inclusion, exclusion, limits, inside, outside

For lack of really knowing whether conceptual work still holds any meaning today, we can at least console ourselves—about the death of art, the end of history, or even the destruction of philosophy—by telling ourselves that after all, “it works”. But the beauty of these projects resides perhaps in that their conceptual complexity fades quickly—leaving only the delight in the mechanism—as if we, artist and visitor alike, were brought back to the intelligence of childhood, to an era where thought is deployed in all its entirety in actions, in motivity, the exploration of the environment or in assembly.

Jean Ernest Joos
Translated from the French by Janine Hopkinson