During Nuit Blanche in Paris on the evening of October 4, 2009, de Broin unveiled a 7.5-metre disco ball, covered in 1,000 mirrors and held 60 metres in the air by a crane in front of the palatial French senate building in the Jardin du Luxembourg. 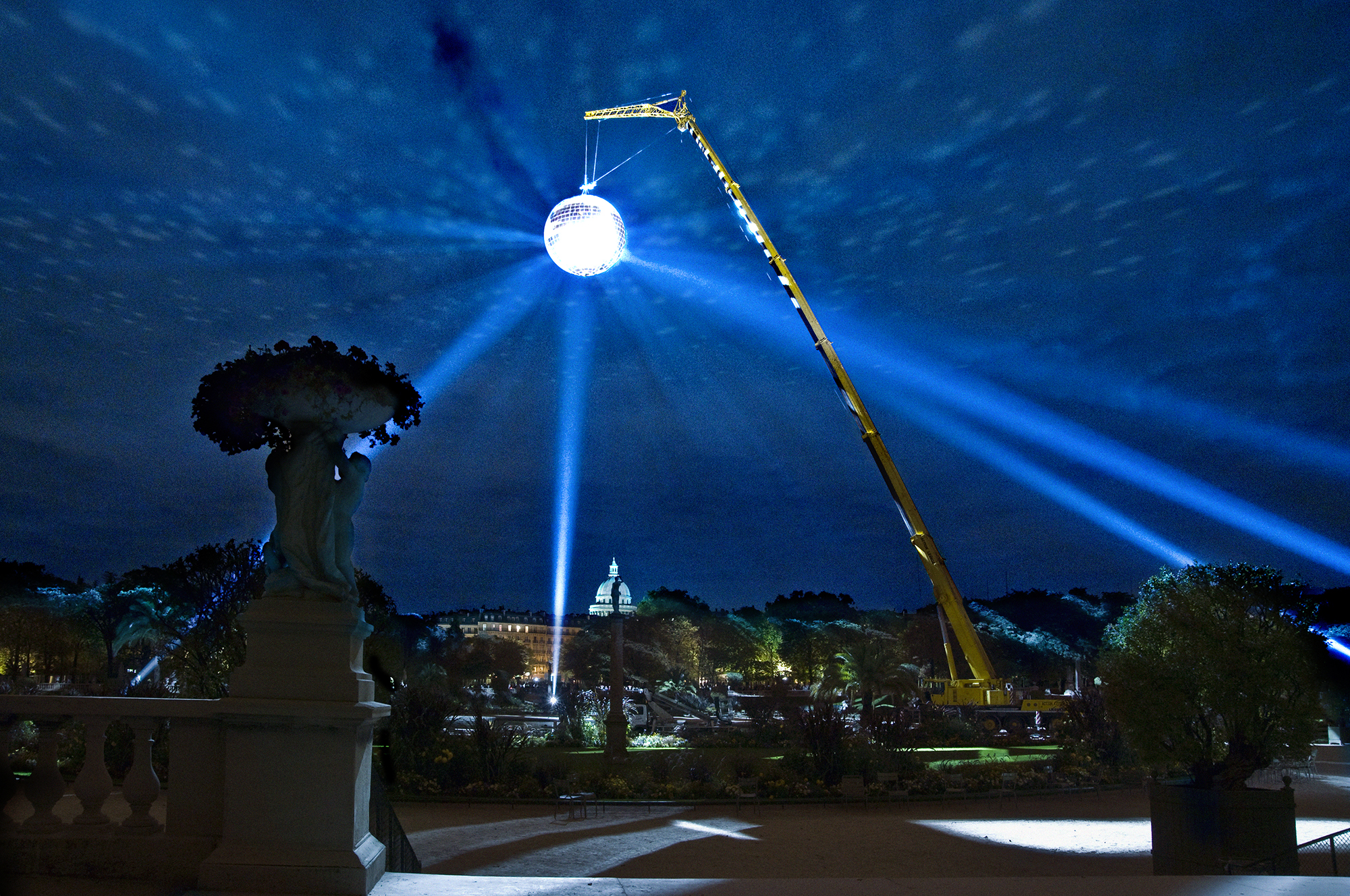 Powered to revolve by motor, La Maîtresse de la Tour Eiffel (2009) was spotlit from below by air raid–style searchlights that set vast shards of reflected light dancing across the sprawling sculpture gardens and onto the facade of the senate building, and, most impressively perhaps, created a shifting starscape that could be seen across the night sky.
For all the glittering spectacle and public-art frenzy surrounding the work, de Broin remains down-to-earth and pragmatic—if a little poetic—in accounting for his mirror-ball triumph. “Paris is known as the City of Light. But because of the light, we don’t see the sky,” he says. “It is also a city of philosophical movements, like Les Lumières. Philosophers started to think while looking at the sky, but now there’s too much light. I wanted to recreate the sensation of the sky. We need to see the stars. That’s how we start to think.” 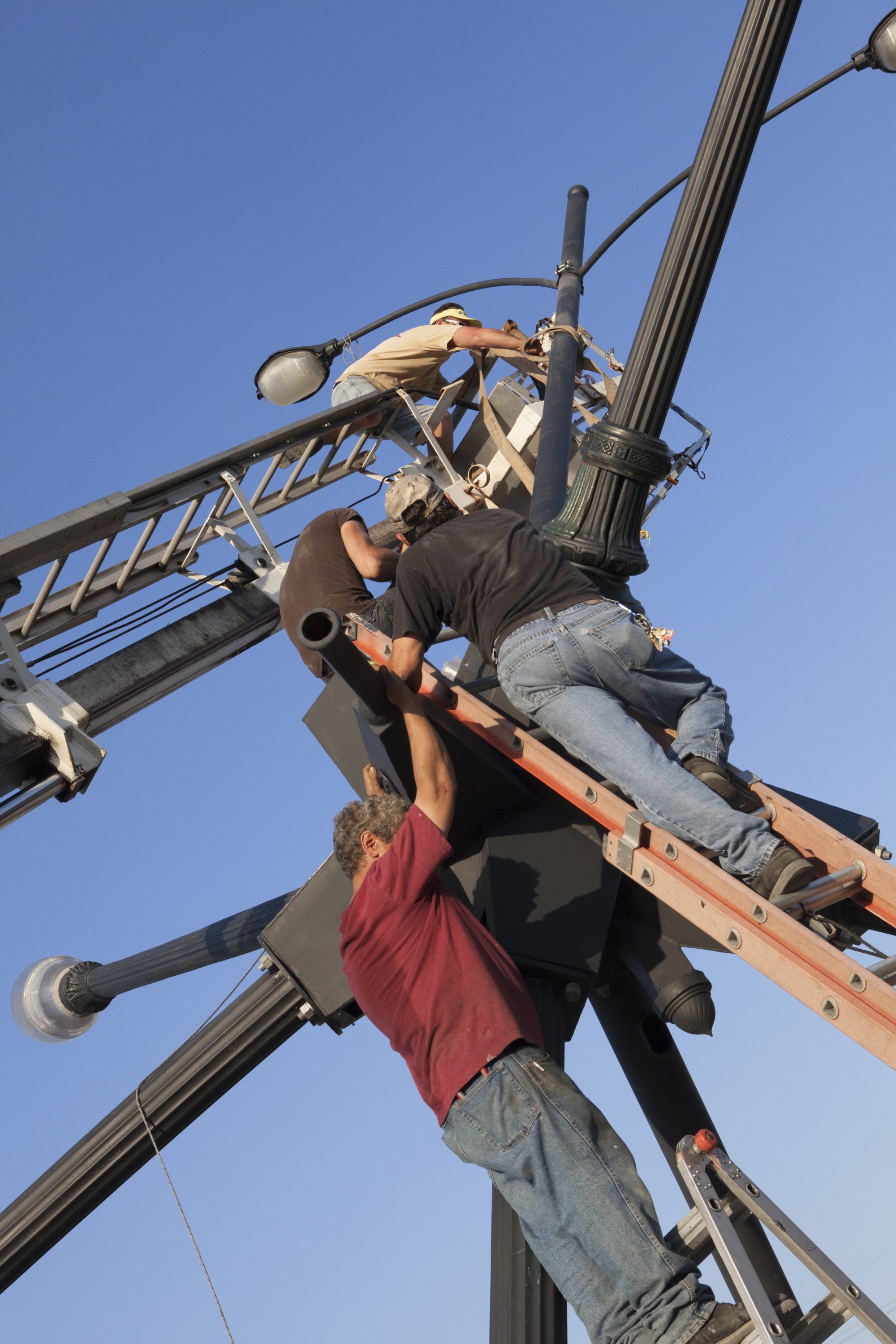 The inclination to talk about the tensions between light and dark, inside and outside, the personal and the universal—all mixed with a philosophical edge, a utilitarian humour and an abiding concern for public engagement— came up time and again when I met de Broin in Montreal this past August. Now 41, he had recently returned to the city after spending much of the past six years in Berlin, Paris and London.
Things have moved with growing momentum since the late 1990s, when de Broin first emerged as a leading light on the Quebec and Canadian contemporary-art scenes. From gallery shows to major public-art projects, he has made a name for himself by reimagining the common denominators of everyday life in absurdist and often subversive terms. In Entrelacement (2001), a knotted bike path leads riders on a dizzying maze-like trajectory. In Blue Monochrome (2003), he transformed a garbage dumpster into a luxury hot tub for adventurous gallery audiences. In Black Hole Conference (2006), he reconfigured mass-produced office chairs into a looming, spherical test of board-room hierarchies. And, perhaps most famously, in Shared Propulsion Car (2005), he converted a classic gas-guzzling Buick Regal into a pedalpowered road vehicle that landed him in a Toronto courtroom, defending the distinction between a bicycle and a motor vehicle. (He won the case.)
De Broin’s art sets the world around us askew. His works act as what we might call perceptual resistors—objects that both rely on and reject existing systems of thought and expectation. They are and are not what they seem, and it is in this logic-defying middle ground that meaning rises to the surface. “For me, it’s poetic when you have resistance and power working together creating ‘heat’ that escapes from the system. It’s a kind of spiritual moment where much of my work begins,” says de Broin. “It’s the thing that escapes out of the system that shows there is a possibility to go beyond what is given.”
De Broin’s latest work may well deliver another Paris-like coup. Created to show in concert with Prospect.2 New Orleans this fall, the work, Majestic (2011), is a monumental star-shaped sculpture constructed from a motley assortment of street lamps of various sizes and shapes, all savaged after Hurricane Katrina. Spearheaded by the Toronto curators Rhonda Corvese and Laurel MacMillan as the inaugural project for their The Third of May Arts Inc., the work was two years in the making and included, among other logistical challenges, a nail-biting session of online bidding for the street lamps. (Somewhat mysteriously, Corvese and MacMillan faced some hectic, last-minute competition.) The planned site also changed just as de Broin arrived in New Orleans in early September to assemble the piece. Majestic is located at 1013 Common Street in the Central Business District. “This is downtown New Orleans, very close to the French Quarter,” says MacMillan. “The site is a raw-looking vacant lot. Michel was specific that he did not want a manicured site; he wanted the sculpture to look a bit incongruous, as if it had somehow just landed there. It will definitely turn heads.”
In the end, the piece seems to be as much alien spaceship as urban history monument. Featuring an array of light beams projecting both into the sky and back in toward the star’s core, Majestic extends de Broin’s fascination with the illuminative possibilities of light and dark, while the light standards themselves attest to design changes wrought over the past century. Installed, as de Broin describes it, “between a half-demolished building in the centre of town in a wasteland full of garbage,” the work presents an unexpected jumbling of past and future as well as a very immediate record of hurricane devastation. For de Broin, however, Majestic is about more than destruction. “You could say it’s all about transformation,” he says. “It’s taking things that were lying down and energizing them by putting them together in a way that creates something powerful and new. Like a storm.”