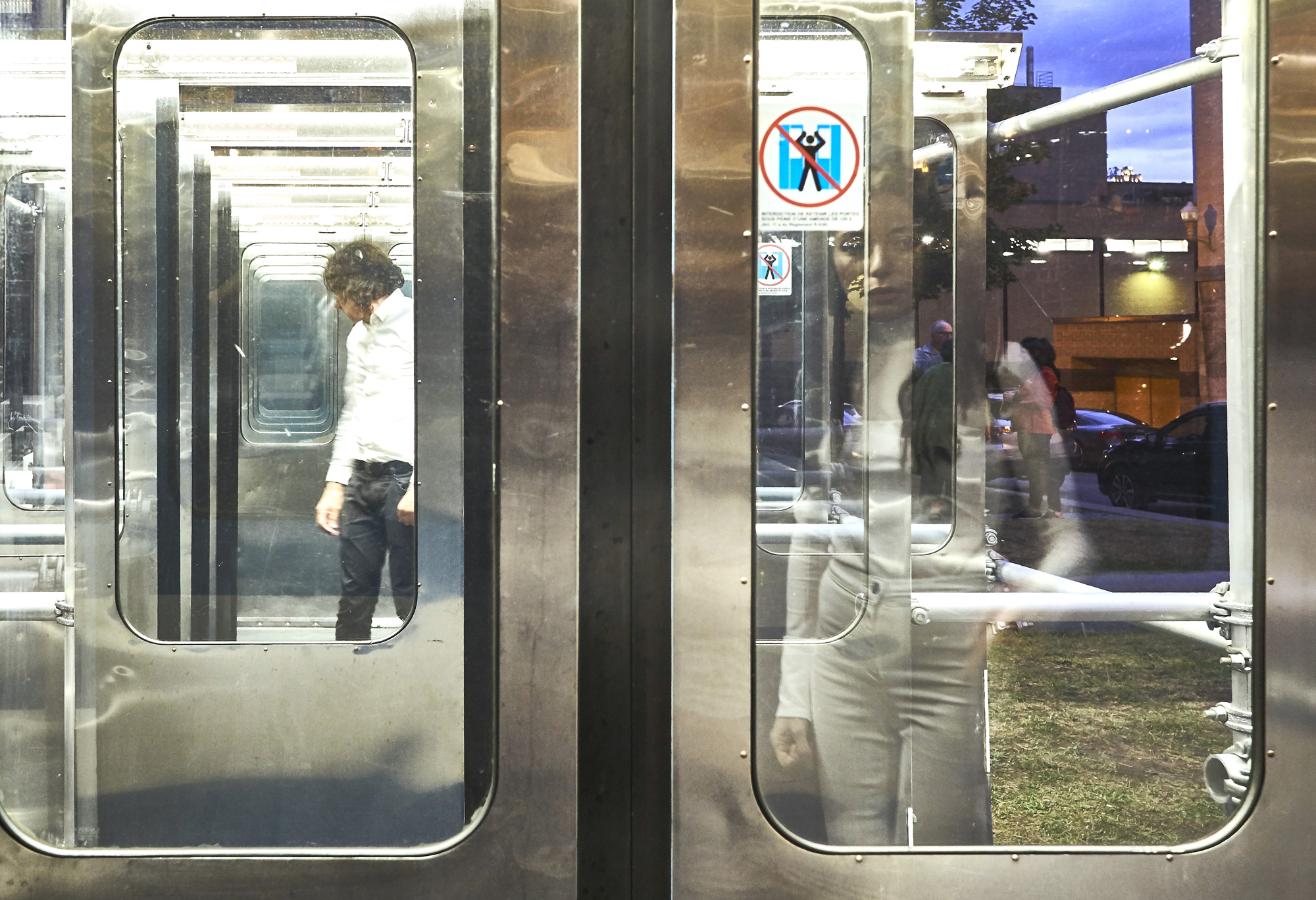 Whenever a city updates the rolling stock of its subway, a familiar question emerges: What to do with all the old metro cars?
You can hurl them in the ocean to make artificial reefs, or use them for emergency housing for the homeless, or sell them to North Korea, as Berlin did in the 1990s. Or, as in Montreal, you can turn them into public art installations. The Montreal Metro is currently rolling out its sleek new Azur rail cars, putting its half-century-old MR- 63s to pasture. Under the supervision of STM, Montreal’s transit authority, some of the first and oldest cars are preparing themselves for new and radically different lives. Thresholds (Seuils), by artist Michel de Broin, is the first of seven winning MR-63 reuse proposals to STM. The installation debuted in the city’s Quartier de Spectacles during KM , an outdoor urban art festival that ran from August 30 through October 15.
In it, 12 lined-up sets of MR-63 doors swing open when set off by newly installed motion sensors. (“It’s like controlling a steam engine with a microprocessor,” de Broin says, because the door motors are so old.) As the visitor passes through the installation, the doors slide open and closed: It’s as if the reused objects “were molded around the visitor’s body,” the artist says.
The 47-year-old Montreal artist, best known for his use of radically repurposed objects, has long shown a particular interest in transportation. In Shared Propulsion Car (2007), a stripped-down 1986 Buick Regal is used as a pedal car on the streets of Manhattan and Toronto until being pulled over by police and towed. In Trial (2015), the ensuing traffic court hearing is reenacted verbatim inside a moving subway car. He has also made a bicycle that turns the rider’s energy into smoke (Keep On Smoking, 2016) and a project that explored the use of the use of a driver’s body fat as an alternative to gasoline (Reciprocal Energy, 2008).
“These objects are diverted from their [original] purposes to create something that is not productive as much as it provides a means to question the [capitalist] system that initially created them,” says de Broin. “These creations are chances for the objects to revolt against the function and the discipline that inflicts them.”
Thresholds is an example of what de Broin refers to as “technological archaeology.” He tells CityLab that the installation demonstrates a “treasure of know-how” buried in the bodywork of the retired rail cars. It makes visible and reactivates, he explains, “the technical memory of a device rendered obsolete by the arrival of new cars, but which nevertheless testify the innovations that marked their era.”
The artist doesn’t know yet where Thresholds will travel next. Pending approvals, Montrealers should expect to see the other six reuse projects in the near future. Those will include: two new large-scale structures, a fire-prevention training car, a coffee shop for a polytechnic institute, and installations inside a skate park and the Jardins de Métis.