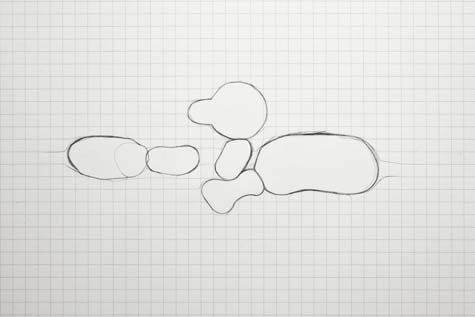 In the late nineteenth century, the American mathematician and physicist Josiah Willard Gibbs published several treatises under the title‚ On the Equilibrium of Heterogeneous Substances‘ in the‚ Transactions of the Connecticut Academy of Arts and Sciences‘. Here Gibbs first described entropy as a physical unit. Entropy is a quantitative measure of the distribution of energy and matter. In nature high-entropy, disorderly states are more likely to occur than low-entropy, orderly ones. An orderly system is bound to transform into a disorderly one sooner or later, whereas disordernever spontaneously changes into order. Spontaneous processes, commonly called ‘irreversible‘, always produce entropy, while reversible processes do not partake in the production of the overall entropy and therefore do not unfold spontaneously.

Michel de Broin’s work has a double-fold affinity with the issue of entropy. As with the concept of entropy, one may differentiate between energy and information. At the level of information, a subtle value can be made out in Michel de Broin’s sculptural works by the eye of the beholder – it realises that the given sculptural form contains identifiable elements. The combination of these single elements produces a new, different form, which in turn might be identified as well. This identification, however, succeeds only in part since the information gained from the firstly achieved identification process is always at odds with the result from the second identification process. And vice versa. Though synonymous with low entropy, the identification of the known element thus blurs the reception of high entropy as the newly perceived information.

Looking at Michel de Broin’s oeuvre, we think we know what sculpture is but the individual work factually subverts and disappoints our expectation. For want of a word that would make us understand this deceitful disappointment, I propose to use the artefact ‘yportne’. This term could also be applied to the work entitled ‘Keep on smoking‘ (2006) – a bicycle with an exhaust pipe, which releases smoke while one is pedaling. This sculpture could have been a prop designed for Buster Keaton. Its effect unfolds from an obvious contradiction: ecology versus waste of energy. This may also be understood in light of the paradox of reverse entropy, already contained in yportne. It comes as no surprise that Michel de Broin is able to pair his bicycle-cum-exhaust with a car lacking precisely that: In his ‘Shared Propulsion Car‘ (2005), four individuals could together pedal the motor-less big American car around the city. With this pedal driven vehicle, De Broin influenced the traffic in New York – reverse entropy. The sculpture simulates functionality, yet it functions as well. If possible, one should contemplate Michel de Broin’s works literally from the rear – just as the word ‘yportne’ may also be read the other way around.