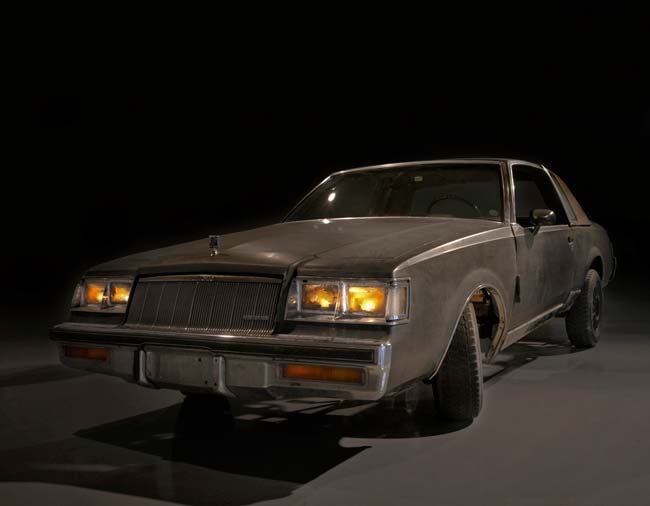 RESISTANCE has been the driving metaphor and conceptual core of Michel de Broin’s artistic work since the mid-90s. A singular feature of the Quebecois artist’s approach to this is the creation of physical systems that simultaneously generate a force and thwart it. As Bernard Lamarche has cogently demonstrated, de Broin does not work resistance as “an against” but as something that works “with” materials to uncover tensions and contradictions that would otherwise go unnoticed. (1) This way of working is by no means an inconsequential gesture, for the artist takes great care to reinject his micro-systems into the broader social field and the power relations operative within it.

In two recent works, Shared Propulsion Car (2005) and Keep on Smoking (2006), he applies this method to the domain of transportation, providing solutions to the petrol crisis that are pragmatically futile and symbolically fruitful. His approach is critical of our consumptive madness, yet it playfully flies in the face of conventional eco-wisdom. These works can be said to constitute a sort of petrol-crisis diptych that most fully reveals its force when they are viewed together.

In Shared Propulsion Car, a project created for Exit Biennial H: Traffic (2005) at Exit Art gallery in New York, de Broin stripped a 1986 Buick Regal of all its motor parts and installed a “cutting-edge” pedal and gear mechanism that makes it possible to drive the car by cycling pedals installed at the foot of each passenger seat. The stated purpose of this human propelled ‘mobile is to “raise the vehicle’s resistance to the culture of performance to an unprecedented level.” (2) Raising the resistance factor requires a radical slowing of the car’s performance potential without completely compromising its ability to function. It is only when the car is driven on the street and preferably in traffic–such as on the Shared Propulsion Car’s ride through the city’s Chelsea district–that its apparent environmental advantages are fully revealed: zero fossil-fuel consumption; maximum occupancy, since it requires the pedal power of four passengers to operate properly; and the healthy slowing of traffic thanks to its maximum 15 km/hour speed. Wrapped within the cumbersome and heavy frame of the Buick Regal, these apparent environmental benefits prove, however, to be quite impracticable and even absurd as an alternative to currently existing technologies. The real function of this dysfunctional hybrid resides in its resistance potential and its camouflaged art status.

This rolling contradiction of an object ironically resists the “culture of performance” on two counts: as a traditional sturdy gas guzzler stripped of its motor it is powerless and is left only with its appearance; as an ecological alternative it does not perform well enough to be viable. This combination of powerful outward appearance and limited internal function inscribes two opposing forces (appearance vs. function) within the workings of the car. Its appearance, weight and size act as resistors to the pedal power, and the human-propulsion mechanism goes against what one would expect to find under the hood of such a regal frame. In the process of yoking these two contradictory elements, de Broin has created an impossible object, at least when considered on a street level.

It is only as an art object that this car can be allowed into the realm of possibility. In unleashing two opposing forces within the vehicle, the Shared Propulsion Car creates a new locomotion possibility and thereby reroutes our habitual perception of the automobile and the broader problems associated with its use. In a further twist, this art object only becomes fully realized through its displacement into the flow of traffic–outside the confines of sanctioned art spaces–where its metaphorical resistance becomes an effective disturbance in the terrain of the real forces that it references.

Keep on Smoking, exhibited as part of de Broin’s 2006 solo show Reverse Entropy at Kunstlerhaus Bethanien in Berlin, continues and complements this theme of transportation and the petrol crisis, though it puts a decidedly different spin on the matter. Like Shared Propulsion Car, Keep on Smoking reworks a mode of transportation in a paradoxical manner. The work consists of a vintage Berlin street bicycle that has been refitted with a secondary chain coupling system, a power generator, a smoke machine and an exhaust pipe. This “ecological” vehicle recuperates the renewable energy produced by a cyclist to supply the electrical power generator that operates the smoke machine. Billed by de Broin as an “alternative to petrol,” the smoke-producing bicycle functions as an ironic counterpart to the emission-free Buick Regal. Whereas the former is laboriously propelled by collective human energy, the latter uses the energy of a sole operator to simultaneously propel the bicycle and feed the power generator. Like Shared Propulsion Car, the Keep on Smoking bicycle has counteractive forces inscribed in its workings, but they function in a different manner. In riding the bike one’s energy simultaneously serves to move the bike forward (productive force) and to power the smoke machine (consumptive force). One’s kinetic energy is arduously dispersed into two channels, making riding the bike a tiresome task.

Through this literal coupling of productive and counterproductive forces, de Broin playfully tinkers with the incongruous coexistence of an ecological appearance and an apparently pollution-producing process. However, he cleverly inverts the equation in Shared Propulsion Car by toying with an indexical function. Where there is smoke there is fire, goes the standard Peircean semiotic explanation of the indexical function. In the case of the pedal-propelled car, the appearance of a “fire”-producing source (a moving car) is upheld but the index of this function is absent (no exhaust emission). With the bicycle it works the other way around: the index (the smoke) is evident but there is no apparent autonomous wheel-driving motor function, only a consumptive mechanism. Together these two operations highlight certain otherwise overlooked aesthetic qualities: bereft of the noise and pollution factor, the moving vehicle arguably becomes an object of pleasurable contemplation; likewise the flow of harmless smoke from a bicycle exhaust pipe also has an undeniable visual charm.

With all this considered, it is clear that the Keep on Smoking bicycle, like its four-wheeled counterpart, can only meaningfully sustain its internal contradictions, flaunt its hidden attractions and assume the status of possibility within the field of art. It is in this regard that its maiden voyage in the Kunstlerhaus Bethanien gallery is particularly revealing. At the opening of Reverse Entropy, de Broin rode circles through the gallery on the bike with the intention of filling the space with a thick haze of smoke through which nothing could be seen. Though he apparently ran out of kinetic energy before he fully carried out this allover monochromatic but hazy undertaking, the exercise revealed the bicycle’s potential to surprisingly act on the modality of the visible. Rather than bringing the object to bear on the street, this incursion (which certainly merits more extensive examination elsewhere) insinuated the smoky index of petrol-fuelled street traffic straight into the white cube for all to see.

With this petrol-crisis diptych, de Broin is unabashedly taking viewers and unsuspecting passersby for a ride, but only until they realize what it is he is driving at. By shifting the gears of our perceptual apparatus, this tandem of vehicles, as ironic and jocular as it may be, ultimately points to the far more nefarious ride we all have been taken on by an axiomatic fuel-driven economy that has no brakes.