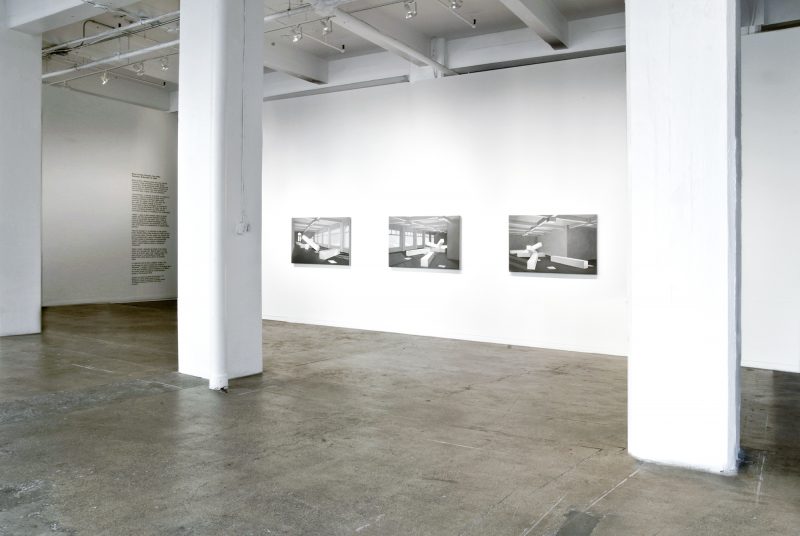 At first impression, Michel de Broin’s exhibition at Plug In ICA appears oddly unbalanced. The main gallery is relatively bare, save for a few small pieces scattered about. But turn to the right, and one of de Broin’s large shelter sculptures, made of 10 found tables stacked together to enclose an inaccessible hiding space, is crowded into the small side gallery.
But all is not as it seems. A triptych of paintings hung discreetly along one wall depicts the empty gallery from three perspectives, but with a significant architectural overhaul. The columns that line the centre of the gallery have been sliced down and balanced on top of one another in a modernist sculpture reminiscent of Carl Andre or Richard Serra.
Ironically, the sculpture can only exist in the imagination—if one were to actually slice the supporting columns, the gallery would collapse. The artist leaves the gallery sparse enough for visitors step into his vision of impossibility. Rather like the remnants of a performance piece, de Broin provides only the “documentation” and an empty gallery, leaving the visitor to reconstruct the scene in their minds. It’s a clever and bold use (or un-use, depending on how you look at it) of the space. Most of de Broin’s pieces in this exhibition, titled “Disruption from within,” are performative in nature. At the gallery’s far end, a drill lies on a plinth in a puddle of water. Setting up a fallacy both logical and pathetic, the drill is riddled with holes from which water spurts. It’s as though the drill’s aorta has been severed, leaving a puddle that seems on the verge of spilling out towards an electrical plug. Titled Bleed to Death, the drill is both dead and deadly.
On a television mounted near the entrance, an actor hired by de Broin putters through Winnipeg’s downtown core on a bicycle outfitted with a smoke-making device. In another ironic turn, the bike uselessly sputters smoke generated by the bicyclist’s efforts. He elicits curious stares and, at one point, a group of kids follow him like he’s the Pied Piper, innocently asking if the bike can go any faster. The same bike shown in the video sits in the centre of the gallery, offering visitors a closer inspection of de Broin’s absurd construction. An exhaust pipe vents out the back and the machine is operated by a series of switches and knobs mounted in a box between the handlebars. All operations, from the voltmeter to the test smoke switch, are indicated by labels made with one of those cheap plastic label-making machines. The device’s homespun design recalls the time machine that Uncle Rico, full of naive optimism, orders online in Napoleon Dynamite. In fact, de Broin’s work carries echoes of the same black, awkward comedy that runs through the film. “Disruption from within” might be imagined as a series of botched experiments—but importantly, ones that de Broin understood as doomed to failure, and embraced for that very reason.