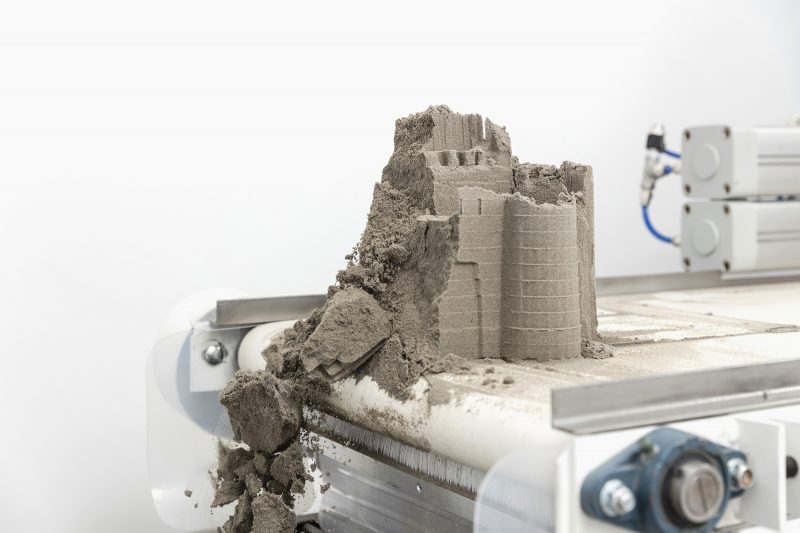 There is no beginning and no end to Michel de Broin’s Castles Made of Sand (2016). Installed high above the Toronto financial district as the most recent commission for the BMO Project Room, de Broin’s hulking installation pivots on a simple conceptual proposition: how to construct a machine that builds and rebuilds sandcastles. Yet what might seem like child’s play is in fact deceptively complex. Months of consultation with engineers, scouring scrapyards and custom-designing parts, and testing the granular composition of various sand types all had a part in this feat of mechanical improvisation. A spout at one side of de Broin’s machine pours precisely 10 litres of hydrated sand (sourced from Sandbanks Provincial Park east of Toronto) on to a conveyor belt. The pile is carried to a stainless-steel mould and, with a massive 4,000 pounds of pneumatic pressure, shaped in a few seconds into a castle. That castle—a coincidental replica of the Royal Canadian Mint, according to de Broin—continues along the conveyor, stopping at the end of the belt where it dries and cracks until the next turning of the tide (the machine is timed on lunar cycles) when it’s tipped over the edge and the circuit repeats, ad infinitum.
Castles Made of Sand is more than just an infernal machine of sorts; it’s a metaphor rife with contradictions. Consider the reversal of economic hierarchies in embedding an industrial-scale machine at the heights of white-collar capital, or the parallels between the unseen hand of tidal gravity and the mysterious market forces of financial ruin and return. There are odd ironies, too: the complex design and absurd amount of power needed to form a simple sandcastle, and the fact that, despite its imposing presence, the machine sits static during office hours waiting for the next tide (though it can be set in motion on demand by a “privilege key”). From its vantage point atop the skyline at the edge of Lake Ontario, the work looks out over an ever-changing cityscape of brinks and mortar and glass facades—all in essence made of sand. De Broin’s castle becomes a temporary fixture in that view but, like all things subject to an ephemeral existence, it and the city and society that surround it remain perpetually on the brink of collapse and reparation, no matter how seemingly dominant or eternal.